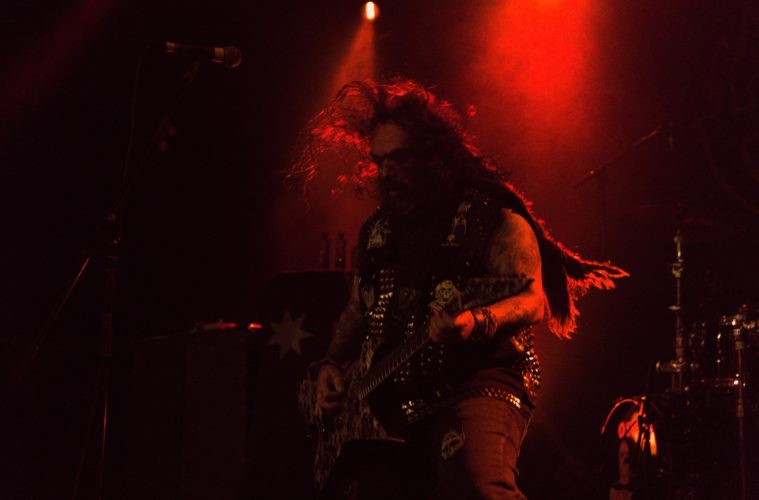 Alright; The Cavalera brothers are in town. They’re set to play material from two of their crowning achievements: 1989’s Beneath the Remains and 1991’s Arise; both monumental metal classics in their own rights.

So, let’s set expectations really early: Max Cavalera is definitely going to mention fire at least fifteen times. There will be drunk, sweaty people everywhere and everyone over 30 (which to be honest is 90% of the crowd) is going to have a sore neck and knees by the end of the night.

Spoiler alert: all of that happened.

But let’s wind back to the opening band, local heavy rock 4-piece Carbon Black. It was surprising to see Carbon Black announced for this show as they’re a lot more melodic and groove metal-driven than the headliners.
It might have made more sense to put a more thrash-centric band on the bill. However, Carbon do their best to win over the crowd which does not take long.

Carbon Black rattle through a short but sweet set of songs heavily focusing on material from 2018’s End of This. The band incorporates rhythmic, primal drums with grooving, Pantera-inspired riffs whilst vocalist Jon Hurley commands his powerful, yet melodic voice over the top of the throng. It must be a difficult task to tackle an opening slot like this but the boys in Black take it head on and the crowd is very receptive and boisterous. This might have something to do with the amount of beers consumed at the pub across the road beforehand. At any rate, CB definitely made some fans tonight.

There was an overall feel of metal celebration within the walls of The Metro. Punters young and old were there to share their memories of classic Sepultura and what the Cavalera brothers meant to them with whoever would listen.

To a deafening roar, Max and Iggor Cavalera were joined by current members of Soulfly (bassist Mike Leon and guitarist Mark Rizzo). Although it seems there were a lot of people expecting to hear Arise and Beneath the Remains in their glorious entirety, what transpired was much more memorable.

Max and Iggor selected 6 songs from Beneath the Remains and 5 from Arise to pummel the Sydney crowd with, as well as a few well placed covers such as “Orgasmatron” and “Dirty Deeds” (not to mention short snippets of Black Sabbath and Slayer in between songs).

Opening with a crushing rendition of Beneath the Remains and the mosh pit erupts into a frenzy of denim jackets, swinging hair and screaming fans. The crowd energy did not wane one bit for the 1 hour+ set.

Max takes the time to welcome the crowd around 4 songs in and has a cheeky dig at his previous band mates by saying “THE REAL SEPULTURA IS HERE IN SYDNEY TONIGHT”. If you’re in the know about the history of his departure from the band and subsequent catalogue of material after said departure, then you will understand why that is up there with some of the biggest shade thrown in the history of Heavy Metal.

Max continues with “Let me see your fucking fire hands in the air” and rips into a devastating “Slaves of Pain”.
It’s hard not to get excited about what everyone’s witnessing. If you’re a metal fan you’ve seen the footage of Sepultura in the 90’s. It was like Beatlemania and tonight is no different. Guitarist Mark Rizzo is out on stage to show you how Andreas Kisser originally played those leads; blisteringly fast, full of emotion and air guitar-inducing.

On a personal note, Arise is one of my favourite Metal albums of all time. To say that I was excited to hear those songs played live would be an understatement. The one-two-three punch of “Arise”, “Dead Embryonic Cells” and “Desperate Cry” was enough to turn every crowd member into an absolute animal. The band ended up somewhat-drowned out by every member of the crowd singing/screaming at the top of their lungs; some perhaps too drunk to remember the lyrics but screaming nonetheless.

The wonderful thing with the Cavalera brothers is they didn’t fuck around with the fake walk off stage encore; they just kicked straight into fan favourite “Troops of Doom” (from Sep’s first album Morbid Visions). They then kept the ball rolling with AC/DC’s “Dirty Deeds”, followed by the absolute pinnacle for the mosh pit over the night, “Refuse/Resist”. The set ended with a medley of a faster “Beneath the Remains“, “Arise” and an absolutely bone-shattering half-timed version of “Dead Embryonic Cells” (if you know the song you’ll know what I’m talking about).

Well there you have it. Everyone’s knees and necks hurt, Max mentioned fire and there were drunken sweaty people everywhere.

(Encore that wasn’t really an encore)

“Troops of Doom” (with “Reign in Blood” intro)

“Beneath the Remains/”Arise”/”Dead Embryonic Cells”

(Fun fact: Max and Iggor have said that the gig was a highlight of the tour.)