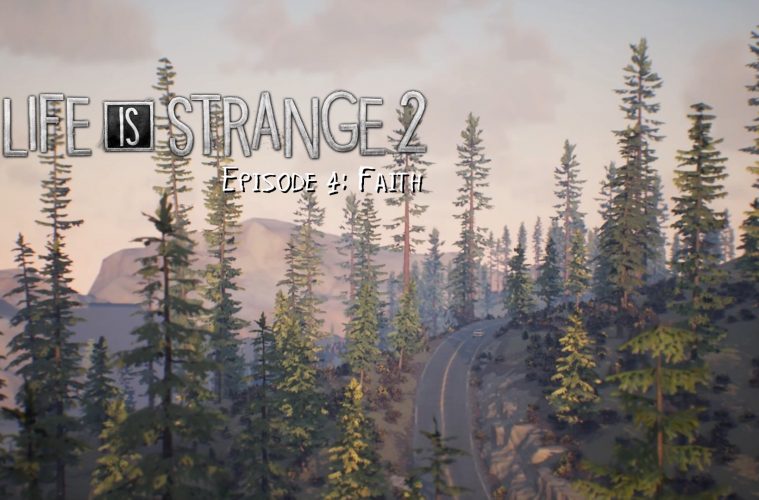 Note: This is part 4 of a 5-part review that will cover all 5 episodes of Life Is Strange 2. THIS REVIEW SERIES CONTAINS SPOILERS! Parts 1, 2 & 3 here.

Have you ever been so shitted off by a game that you abandoned a review series on it that you’d started? Well I have. I started reviewing Life is Strange 2 episode by episode when the game dropped last year. I finished the game, but not the review. It’s not because the game was bad; it’s not. It’s… good! It’s a good game. It has difficult moments, and for the most part they are tolerable. Episode 4: Faith – the episode covered here – ya know… it just gets a bit too much. This episode we get:

I mean shit. It’s almost like DONTNOD are working their way down a list of triggering themes, trying to squeeze all of them in! The brutality doesn’t serve the story in the way it was perhaps intended, it just seems to be there to cheaply instigate a heightened emotion in the player; a consistency through each episode that I have commented on in previous episode reviews. Here It’s less forgivable because it’s used so frivolously.

So I didn’t want to review this episode. I still don’t, but clearly I am, so here we go!

Episode 3 left off with Sean unconscious with a piece of glass sticking out of his eye (bad) and annoying little brother Daniel nowhere to be found (good). I suppose in a way Faith‘s start is a wish come true; we get some time away from Daniel – FINALLY!

Sean has been captured by the police, so we kick things off with him held in custody in a hospital as he recovers from losing an eye. Sean’s sketching with one eye shows that DONTNOT do have the ability to summon emotion in ways that have real value to their narrative. Unlike each previous sketch, when Sean picks his pencil up in the hospital and he struggles to observe his surroundings, it’s legitimately heartbreaking. As the game has moved forward Sean’s ability improves with each page of his journal, and the player gains a sense of having earned this improvement. When it’s taken away, it’s a loss genuinely felt.

Sean’s objective in the hospital is to escape and chase after Daniel (Sean discovers our pot farm friend Jacob took him to Haven Point Church). While there are a few different routes you can take, I opted for the least violent choices and managed to sneak away undetected. And just like that, our boy is free again, and he has a car!

I was secretly hoping Sean would abandon his plan to find Daniel and just cruise through to Puerto Lobos (Peace out enano…). But naw; Instead of that, his journey to the church leads to him getting violently attacked in the desert by two racist assholes named CHAD and MIKE. CHAD. AND. MIKE. A couple of desert dwelling Hank Stamper (the forest racist from episode 1) clones who taunt him, beat him up, make him sing in Spanish for his life… make him say shit that I’m not even going to write here. It’s the worst part of the game. It serves no purpose. Why is this here?

The next morning Sean is outta gas and on foot. He is given the choice to hitch a ride with a truckie direct to Haven Point; the decision whether or not to accept that ride provides the only value from the Mike and Chad encounter. You second guess whether getting in the truck with another stranger is the wisest move. Perhaps walking through the desert alone with no food or water is safer. It’s nowhere near enough value to justify M&Cs inclusion though, as almost everyone is gonna take that ride anyway (so say the stats!). 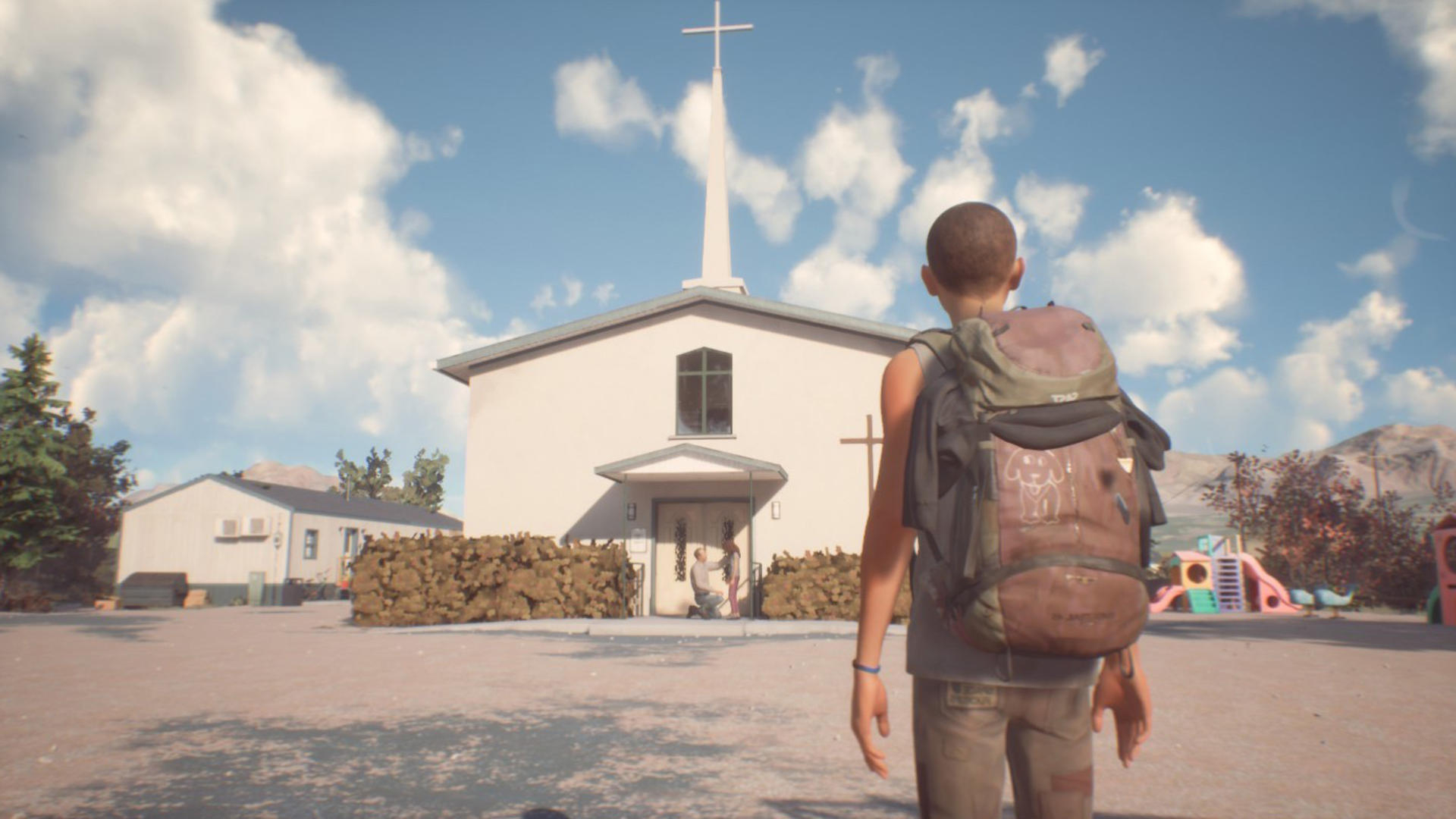 We arrive in Haven and, if things weren’t shit enough, these guys have basically deified Daniel. As if that brat needed anymore encouragement blowing him up, he’s here getting literally worshipped. To be fair though, the kid has undergone a solid brainwashing from Haven church leader / spiritual car salesman, Lisbeth, who parades Daniel around to her congregation as a miracle delivered to her from God. I can hardly blame the congregation for buying into Lisbeth’s claims about Daniel either as he demonstrates his powers for them all, at Lisbeth’s command. When Sean finally has the chance to speak with Daniel, Lisbeth makes it clear that she considers herself Daniel’s rightful guardian and has Sean booted off the premises where… KAREN – his MOTHER (whose presence is teased throughout the story) – is waiting for him.

When it comes to Karen, Sean is damn salty, and rightfully so I suppose – this is the first time he has seen her since she ran off when he was eight years old. The game is generous in how it lets the player approach the Mother/Son relationship. There are pathways that allow for full forgiveness, part forgiveness, and brutal non-forgiveness – with some other variables in the mix. There is a real control given over this dynamic which was appreciated. I’m sure this scenario is a fragile topic for many people and being forced to move the relationship in one direction or another could have spoiled the game for many. Ultimately, Sean and Karen – with a bit more help from Jacob – are able to work together and hatch a plan to free Daniel.

This final section of Faith is where we run into our homophobic and torture content. To free Daniel, Jacob helps Sean to break into the Haven compound and gain access to Lisbeth’s files. Jacob explains to Sean that he was kicked out of Haven because he came out as gay. That’s not the homophobic content. That pops up in the same scene when the guys are caught ransacking the office by one of Lisbeth’s minions, who smacks Jacob around while screaming homophobic slurs at him. Okaaaaaaaay. Did we need that? Wasn’t knowing that he was kicked out for his sexuality enough? Did we really need to hear Nicholas call him a f*g and smack him in the face???? I just don’t see the value.

Finally we get to confront Lisbeth, and by that I mean, we watch Sean get the shit beaten out of him over and over again. Seriously, in this scene he repeatedly gets knocked down, the only control the player has is to mash X to have him get back up again. Sean gets knocked down, gets up, begs Daniel to come with him, gets even more brutally knocked back down. After the second time it was just blatant torture. The violence had no narrative value and Sean’s pleas to Daniel did not need a bloody face behind them to be effective. **sigh**

Eventually Daniel can’t take watching his brother get tortured anymore (kid took about five hits too many imho) and superwolfs his brother to safety. Sean, Daniel and Karen attempt to leave the church (which is now somehow on fire), but of course that ratbag Lisbeth has to have one last loon and tries to keep them all in the burning building to die. Here the game offers a critical choice of how to handle Lisbeth. Again I opted for the most non-violent option in this playthrough. Nobody is injured (in my previous attempt, Daniel ended up psychic-strangling Lisbeth to death, big yikes) and the family escape the church as a unit. Roll credits.

And THAT, is Life is Strange 2: Episode 4: Journey through Trigger City- uh I mean… Faith.

The above might come across as though I didn’t enjoy the episode or its themes. I did – honest! The complaints about cheap trauma I have here are the same as I’ve had with all previous episodes of LiS2, but they are layered on so thick in Faith that they take a precedence over the story and the gameplay. It’s distracting and so forcefully integrated that it comes off as superficial every time. In spite of these tilted story beats, and thanks in large part to Gonzalo Martin’s exceptional performance as Sean, the episode still hits and the direction the narrative moves in Faith remains compelling enough to keep players invested in the story of The Wolf Brothers.

Tomorrow, I begin the conclusion of Life is Strange 2 with Episode 5: Wolves.