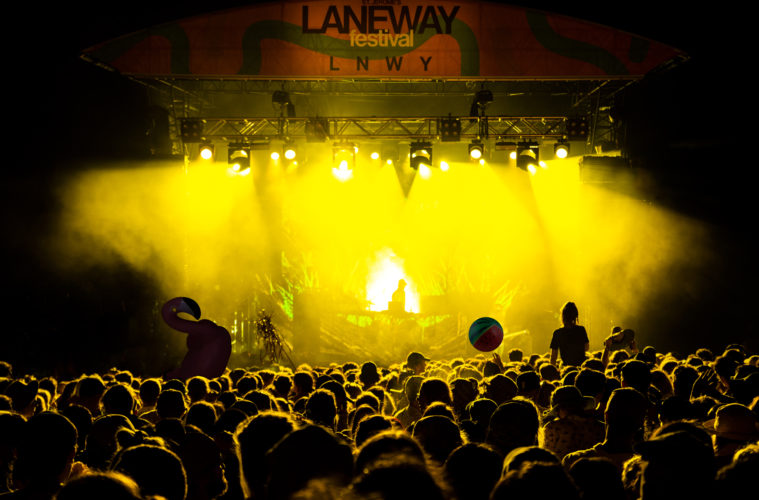 Our gallery for this year’s Laneway is available here.

Tasman Keith opened the Park stage (and essentially the whole festival). His crowd was small but he played as though it was a full house. He knew his way around a beat with his words and did well to carry expression and meaning across. Tasman Keith’s flow was on point and whilst the meaning was important, so was keeping the set fun; both of which he did well.

FRITZ made an appearance on the Girls Rock! stage. Their use of harmonic interplay lead to an interesting combination of punchy, noisy and dreamy music. There’s still work required, but as a band they displayed promise and played a nice, enjoyable set that carried well.

One of the highlights for the day for many people was Ruby Fields. Her music was quite evocative of 90’s / early 2000’s Australian alt. rock. What was played worked well in the live setting as it carried clear and strong. There was an original voice in there and the set was pretty fun, but at times the set felt too much like a tribute band playing.

At the Doc Martins stage Yellow Days performed a set of his soulful music. He and his band were locked in well with each other and whilst derivative, there was still something to be gained. Yellow Days reached out to his audience with his performance and they responded in kind.

Baker Boy was another highlight for the day. His music was pretty funky and smooth. There was a great rhythmic quality coming from his set that helped his music become kind of singalong and anthemic without overtly embodying those elements. There was a strong appeal to what he was doing and as such his live show worked well.

Back over on the Girls Rock! stage imbi the girl delivered a really tight set. Through calm, airy melodies a soulful, strong voice carried words well. At times she used something more akin to rapping. Overall there was a nice balance between methods and a receptive crowd was most appreciative.

Camp Cope took to the Doc Martins stage. In attendance with the band was a relatively large audience. Their songs were far-reaching through strong, relatable message and simple, clear and direct melodies. As a band they were tight. The songs weren’t complex and they didn’t need to be. They provided a frame in which to wrap words around and on that aspect the songs served well. Essentially, Camp Cope delivered and then some.

Closing off the Girls Rock! stage was Alex Lahey. Her set was naked and raw, occasionally sounding angry and bitter. However, there was a sense of fun that carried through. It was a small, intimate set that didn’t get bogged down in the weight of what was sung. A compact audience lapped up each word and note. Despite some minor technical difficulties, Alex Lahey played with ease and left a satisfied audience.

Jorja Smith was a particular highlight of the festival. Songs firmly rooted in soul came from her and her band and carried well up the hill from the Park stage. It was an afternoon appropriate, laid back and relaxed set. The harmonic interplay was solid and there was a great deal of command and power behind the vocals. Jorja Smith knew when to get big in sound without cramping the mood and as such the set flowed well. The songs had an air of melancholy. However, an uplifting feel counterbalanced this.

The Smith Street Band still sound good. Their set was tight and energetic and their melodies carried well. The crowd they attracted responded in kind to the heartfelt lyrics, seemingly finding something in every word to relate to and hold. Compared to their performance at Good Things, this was a better, tighter band. The Smith Street Band were energetic and that really came through.

Courtney Barnett arrived on the Park stage to deliver a really honest set. Whilst sounding very rock, there were elements of country and pop thrown in for good measure. Both Courtney Barnett and her group sounded relaxed and comfortable with each other. As such, the songs moved forward with ease. A passionate, slightly husky voice carried clearly over and through an audience glad to be there.

For me, Courtney Barnett’s set was a good way to close the day. Eventually my feeling ill got the better of me and so I needed to go home and rest.

Sitting down was probably the best aspect of the day and that had a lot to do with the mood of Laneway.

The festival felt very relaxed. Many artists played stuff that was either light or relaxed in some form. The more energetic artists were mostly not too far removed from everyone else and so the festival was pretty consistent.

There was plenty of shade available throughout the day. It was easy enough to sit somewhere cool and still be able to hear music without issue. If you wanted to hang near the two stages right next to each other, then you could easily have parked yourself in the shade for most of the day, although you wouldn’t see much of the performers.

Facilities were easy enough to reach and foodstuffs were in a (mostly) reasonable price range. Rather than have food central to the festival, it was predominantly off to a side. Normally this is an issue, but the organisers got around that by having the food in a position where, if you were moving from one set of stages to another, you could take a slight detour without losing much time if you wanted to eat.

Toilets were easy to access due to good placement. Unfortunately there were times when trying to access one lead to engaging in the line ride. However, considering the space the promoters had to work with, this was an acceptable trade-off.

Getting to each stage was easy enough, although it took a while to properly understand where The Future Classic stage was and by the time I had realised it was a little too late. It was a bit hidden, but I feel as though the fault of missing it lies more on me. The promoters did the best with the space available to them. Hopefully next year they get more space.

Having my bag checked twice by two different entry staff next to each other because they “had to, regardless of the person next to them checking” due to my being told to go through one line, having my stuff checked, then being told to go through the line next to the one I was in was frustrating and also kind of embarrassing. Of the entirety of Laneway, I felt that this was the only disorganised part.

Two people in front of me weren’t allowed to bring in anything in tubes and sunscreen. However, for some reason I was allowed both.

Metal bottles weren’t allowed, but when presented with the terms and conditions there was nothing against them. I was still told that I had to pay to cloak a water bottle that was not against the T&C. When I was cloaking it, someone ran up and said that it was to be cloaked for free as metal bottles weren’t in the T&C. The person then handed a full one-use plastic water bottle for the day.

Compounding upon that is that essentially Laneway was discouraging the use of reusable bottles and promoting waste plastic; waste plastic that, whilst recyclable, was likely to end up in a tip. I can’t verify if that was the intention, but that is how it came across.

It also kind of came across as a way to placate the NSW Police Force; quite a few of which were there. There’s little else that can dampen a good mood than seeing a bunch of police with guns on their belts walk around a relaxed festival. Thankfully this was only a temporary mood killer, but it still lingered in the back of my mind.

Based on what some people said, the police were a little too gung-ho about doing their job.
When I had food a group of people sat near me. Two others soon joined them; one of which the police held up for a little while.

Whilst waiting to get into Laneway, the person went over to a bin to throw out a pocket knife on their key-chain. Once thrown out the police accosted the person and claimed that they were running from a drug dog. This of course lead to a full search.

I don’t know how true this story is, but that it’s believable, unsurprising and expected is worrisome. Of course, not all officers are like this and there has to be room to understand that there are plenty of reasons that could lead to them wasting someone’s time, intentional or otherwise. However, that does not absolve the force from criticism.

This seems nitpicky, but this was stuff that really stuck out. That said, it didn’t ruin what was overall a good festival. Laneway was fun and relaxed. It was satisfying. Here’s hoping it comes back again next year.