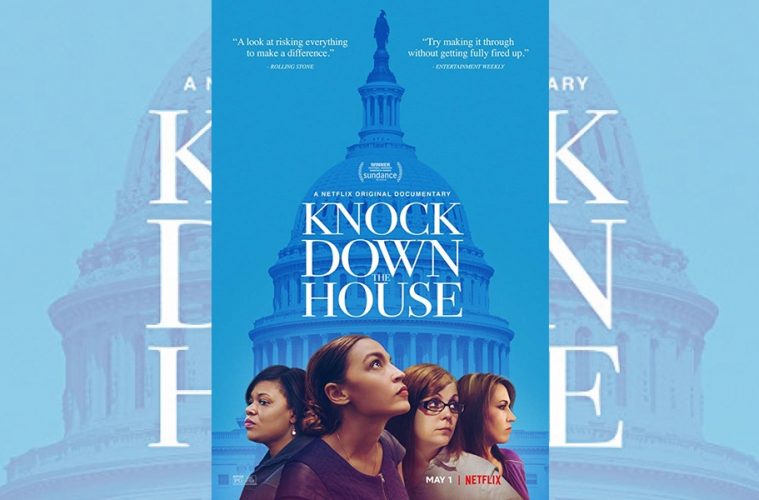 Knock Down the House

“For one of us to make it through, a hundred of us have to try.”

Here it is, ladies (and gentlemen, of course, but especially ladies). After a receiving a standing ovation and thunderous applause at its Sundance premiere, this month has seen the release of the much-anticipated documentary Knock Down the House. For ninety minutes we’re passengers on the emotionally turbulent campaign trails of four otherwise average American women running for congress in the 2018 election.

All four of these liberally progressive women are outsiders, with no agenda except to better their communities. Unfortunately, only Alexandria Ocasio-Cortez (AOC) won her fight. But this doesn’t make the stories of Cori Bush, Amy Vilela and Paula Jean Swearengin any less captivating; each with their own devastating experience that led them to fight for a certain initiative in their campaigns. Cori Bush saw her community in St Louis become torn apart during Ferguson riots. She watched as the police shooting of an unarmed black man changed Missouri forever. Amy Vilela is a Nevada mother, who lost her 22-year-old daughter after she was turned away from hospital with the symptoms of a blood clot because she couldn’t produce proof of insurance. From West Virginia, Paula Jean Swearengin is a coal-miner’s daughter who refused to watch the members of her community suffer the cancerous effects of the coal industry.

When director Rachel Lears and co-writer/editor husband Robin Blotnik first embarked on the candidates’ journeys, they didn’t know how it would pan out. They didn’t know AOC would win and go on to make history as the youngest woman to serve in Congress. The consistent undertone of the film is that for these women, their involvement in politics is deeply personal. They garnered the spotlight after taking on heavyweight incumbents with the same core ideals: the refusal of corporate PAC donations, belief in Medicare for all, and to represent the mantle of the working class. The documentary gives us inspiring insight to their entire campaigns.

Spoiler: there’s a lot of grunt work in running for a local election. We have front-row seats to the tedium; the cold calls for minuscule donations, the knocking on doors, keeping the smile up while being rudely blown off, and being shut down by opposition supporters in your own streets. These women are taking on an incredible burden because they believe they have the power to make a difference in their communities.

There is no question AOC deserved her win. While the documentary may seem heavy-handed in her favour (and why wouldn’t it? She’s energetic, charismatic, and can somehow single-handedly harness the passion of an entire nation), it does give excellent insight to Cortez’s journey.

Her story is compelling. She was viewed as the political underdog – a nice idea in theory but not reality – who overcame enormous odds. We watch AOC go that extra political mile; she turned up prepared and tailored to each event, forging genuine relationships with her voters and their communities. She was the epitome of passion and confidence in the dismantling of her opponent’s establishment politicking.

Perhaps the most endearing element Lears and Blotnick bring to the screen is the connection they create with their subjects – portraying them at their most strong and confident, but also at their most vulnerable. The documentary sneakily highlights a contradictory message: that the emotions these women are using to fight are sources of power, not weakness.

Watching Vilea speak about her daughter is perhaps the most heart-wrenching. Losing a child over something easily preventable is something no mother should ever have to endure; thanks to America’s profit-driven health system, it cost her daughter her life. “We don’t have time to wait around for career politicians, their donors or special interests to do the right thing” she says. “We need bold action, now”.

But there are uplifting moments. Watching the electric moment when AOC realises she has won after the polls indicated she would lose by a rough 35 points is elating. In the lead-up to the announcement, AOC seems to come to terms with the fact she wouldn’t win, but she still goes to vote for herself in the morning and spends the rest of the day handing out leaflets, encouraging the people on the streets to vote.

It isn’t until she’s headed to the wrap party she can bear to look up. “There are journalists running into the venue” she says, with a hand squeezing her partner’s arm. “Oh my God”.

Sure, Vilela, Swearengin and Bush could have had more time film’s spotlight to make it a little more balanced. But you can’t blame Lears for reveling in the good fortune of starting the journey with AOC before she was even on the ballot. She needed 1000 signatures, and she got 10,000. And that was just the beginning.

AOC’s motto is something we could all employ a little more in everyday life: over-performance is key. “For every ten rejections, you get one acceptance, and that’s how you win everything,” she says as she hands out pamphlets with her niece in the chilly Bronx air. “It’s just the reality that in order for one of us to make it through, a thousand of us have to try.”