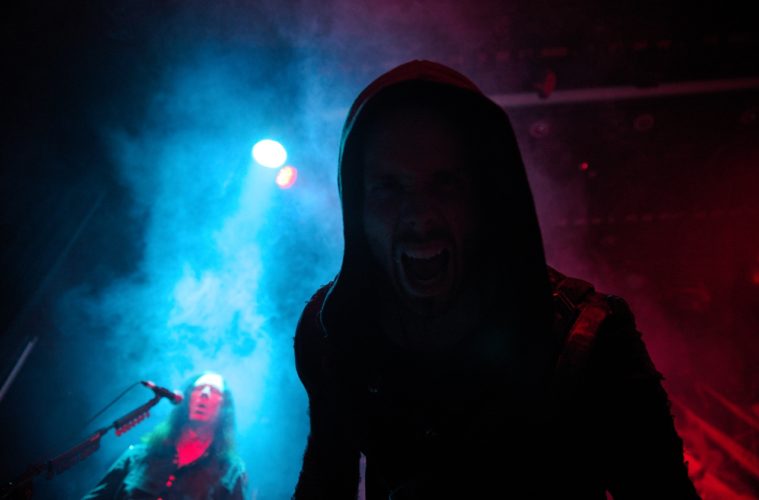 There are a few things you can expect from a power metal/pagan metal show in Sydney; Drunken singalongs, dancing like vikings and Power ballads that would make Celine Dion weep. In the 5 years since visiting our shores, Kamelot have managed to release 2 albums and a best of collection. The fans are here to show their appreciation for the new music and for the fact that these multinational metal fiends have found the time to reach our shores.

Opening proceedings tonight is the south coast’s favourite pagan warriors Saralisse. Cloaked in their best battle outfits and fresh off their support slot for the amazing Dragonland, Saralisse waste no time whipping the crowd up into a frenzy. The three vocal epic attack soaring over folk inspired riffs and rumbling drums create an amazingly inviting atmosphere. If the crowd weren’t drinking before, then they certainly are now.

Next up we find the Brisbane Vikings Valhalore plundering the Manning Bar for all its entertainment. Have you ever seen a band have so much fun on stage that it naturally just emanated to every member of the crowd? Well this was one of those sets. Valhalore does an amazing job of blasting out their unique brand of epic folk metal whilst incorporating straight-up brutality with blackened death metal, danceable moments of uplifting pagan rhythms and even some beautiful, ethereal acoustic moments (they even covered Blind Guardian’s “The Bard’s Song” much to the joy of the mostly packed house).

By this point the crowd was drinking the Kool-aid. Everyone was lapping up the infectious, intricately played songs so much that one could be forgiven for forgetting that there was still a headliner coming. Valhalore have many things on the horizon; plundering international tours, releasing epic albums and no doubt taking on the greats like Ensiferum and Eluveitie on for the helm of the best pagan/folk metal band in the world.

And now, the moment that the voraciously eager crowd has been waiting 5 years for: Kamelot. Opening with a new track from 2018’s The Shadow Theory –  the catchier-than-chlamydia “Phantom Divine (Shadow Empire)” – was a smart move. The band focused their setlist on their last two albums; The Shadow Theory and 2015’s Haven. However they touch on every album released since 2001’s Karma. The crowd has obviously been very receptive to their new material and sang/screamed every word back to them.

Female vocalist Lauren Hart (also in Once Human [seriously, if you’re into metal and haven’t listened to them, then sort yourself out and get around it]) comes out onto the stage like a wind-up Duracell bunny, headbangs and screams her little face off, and then bounds back off the stage quicker than you can say “Circle Pit”.

Speaking of vocal powerhouses, Tommy Karevik is something else. Much like old guards Bruce Dickinson and Rob Halford, he has the ability to sing as if it’s just you and him in the room.

Although Kamelot have been active for over 2 decades they’ve seemingly been able to reinvent themselves and not gone stale. It is all thanks to original member, “Mr. Kamelot” himself, guitarist Thomas Youngblood. Seriously, Youngblood by name, Youngblood by nature.

Kamelot are an incredibly engaging and entertaining band. They manage to encapsulate the audience’s attention from the start to finish of their 1.5 hour long set. To be honest, it wouldn’t matter if you were a casual fan or a diehard Kamelot fan; you would be entertained tonight.

Kamelot have an amazing ability to be uplifting, epic and lavish without ever crossing the line into cheesy or cringe-worthy; something so many bands within this genre do. It comes down to the structural integrity of their songs. Yeah, they have huge choruses but they keep the hard edge to keep away from becoming too poppy. Also, incorporating the harsh screamed vocals of Lauren Hart really keeps Kamelot firmly placed within the metal world. The band hammer through 17 of their highest energy tracks and left hardly a stone unturned. They even manage to include a drum and keyboard performance that didn’t feel trashy or pandering. This world class band have entertained the hell out of the Sydney crowd, and by god we want them to come back as soon as possible.

The gallery covering the show is here.