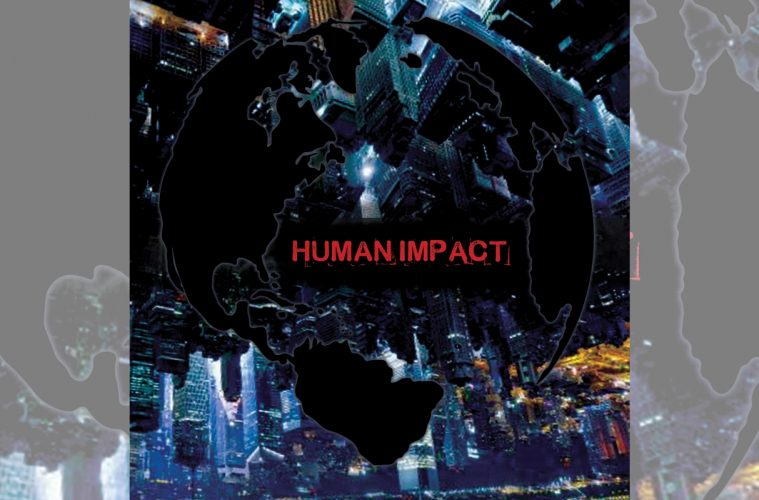 What sounds like someone plugging in an instrument, then bass, then percussion, then some crushed noise. Slow guitar. Bass moving about. Chris Spencer’s vocals come in held low. There’s some kind of anger, or perhaps bitterness in his voice. All instruments unify, creating a highly rhythmic sound to drives the song forward. It sounds rather ragged and broken, sort of junk-like with a strong sense of texture and tone. The song gets loud, but at the same time it seems rather quiet.

“November” opens Human Impact’s Human Impact and gives a really good taste of what’s to come. At the same time, “November” is a bit deceptive in that it’s a little more welcoming than other tracks. There’s an idea of the incoming textures and framework, but the following tracks change in coldness and aggression by varying amounts.

Following track “E605” is a rather cold and menacing track. The percussion switches from some sort of “swing and snap” to something more rolling in the choruses. There’s space for the bass to shine, the choruses get big and harsh, but overall the song maintains its strong sense of tension quite well.

“Protester” has this sort of jagged, stuttering drumming that gives the song a staggered sort of groove. Plenty of rolling bass, the synth adds new dimension without deviating too far from the song; Chris Spencer plays some interesting guitar stuff whilst going into familiar vocal modes.

“Respirator” sounds terse in some places, once more creating tension before letting go a bit more in the choruses. During those Human Impact go on a sort of “escalation” before (at some points) switching to something a bit more melodic. It’s a song of its own, but it also provides a nice way to ease into the more melodic, slower and pointed “Cause”, which makes good use of abrasion to enhance its melodic leanings.

“Relax” is a sort of… relaxed track that does not move at a relaxed pace. Whilst some calmness resides, it holds an undercurrent of tension more than its name suggests. It provides an uneasy breather at whilst carrying stuff forward and leads into “Unstable” quite nicely.

“This Dead Sea” is probably the most confrontational track in terms of sound. Like what comes before it doesn’t spend much time faffing about; it gets in and sets up this forceful, staggering grind. It’s where Human Impact really conjure mass and dread quite effective and just hit really hard.

Whilst talking about these tracks only covers a little over half of the album, the others follow in a similar vein and stay consistent with what’s going on. In general Human Impact stays a solid strike from beginning to end; Human Impact sound pretty locked in with each other and keep hammering away at building a unified, expansive sound and they do so really well.

There’s so much interesting stuff going on with the music. Sometimes a moment is a bit more bluesy; sometimes there’s a bit more of a country twang in stuff, but plenty of the songs sounds rather cold and dark in a dangerous city-like way. The percussion shifts around with great flexibility whilst retaining a hard-hitting punch; the bass moves in and out of everything else whilst holding a great deal of control and identity. The synth thickens out the sound quite well, really building on everything whilst doing a good job of helping guide the music. Guitar isn’t always full on; it knows when to pull back and come forward, enhancing the textural qualities of the music by a fair bit.

It’s difficult to find fault in the performances and what they conjure as the group attack their material with conviction and energy, giving the music most of what it needs. However, if there’s something that becomes a letdown, it’s that Chris Spencer doesn’t stretch his vocal performance nearly enough. That seems like an unfair thing to say due to his preferred style sounding like he’s at or beyond breaking point; something he pulls off brilliantly. That said, it’s clear that he’s capable of more versatility so it’s a shame that when everything else on Human Impact has a familiar, yet exploratory sound, the vocals aren’t doing enough exploring themselves.

Admittedly Chris Spencer still carries weight in his words. He also conjures a strong a sense of stress and horror from what sounds like reactions to societal issues. As he’s not constantly shouting a lot of the words come through clearer and thus stick more. However, on a few too many tracks the delivery becomes far too familiar, as though Chris found one thing and resolutely stuck to it rather than spread his wings. There’s nothing wrong with a commonality between songs, but some of them need more than what the vocals are providing sound-wise.

I held off on writing about this album as for a while it sounded like Unsane with synth. I don’t think I was listening to it properly though, as Human Impact is not that. Sure, there’s familiarity, but this is an album that explores whilst remaining highly focused. Grievances aside, Human Impact deliver a solid slab of music that moves away from its members’ other endeavours.