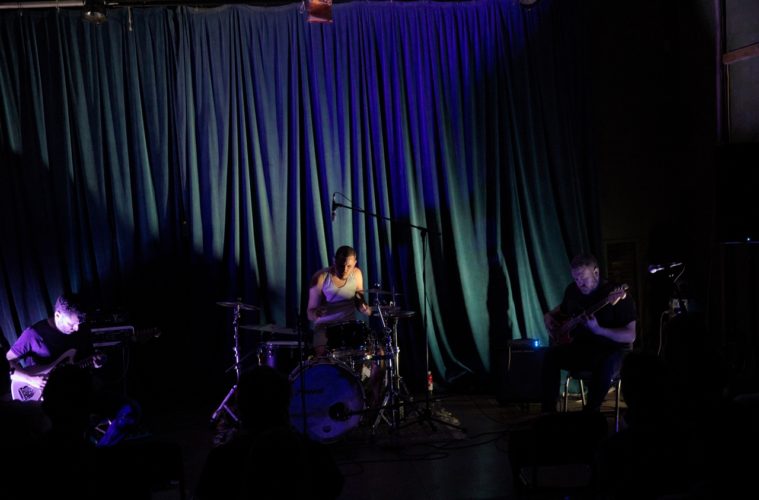 A three-piece, their set revolved around rising and falling music.
For their live debut, they played one song. It took up the entirety of their set.

Their gradual builds and releases carried a kind of tenderness and calm to them.
This was mostly due to how the space between notes and beats worked with the song. However, it too in part was through the choice of quieter instrumentation, as well as the choice to allow the music to flow and develop, almost as though it was leading the band.

Louder segments felt both earned and natural instead of additions to fulfil cynical requirements.
Despite the possibility of a great deal of composition going into their piece, HELU’s song had moments that felt more tightly improvised. It was as though the song was washing over the band and they were themselves being fully in the moment.

Sadly HELU’s set had to come to an end, but it was not long before Instrumental (adj.) began.

Insty didn’t waste time in getting into things. Playing the entirety of their two EPs (A Series of Disagreements and Reductio ad Absurdum), the band threaded the songs together well.

The band worked hard at nailing as much as they could. They moved through each section with much aplomb. There was a virtuosity to the playing, but the showmanship was more on working together. Whilst a back and forth between members could be observed, no one seemed to have a desire to take the spotlight and for that there was strong musical unification.

The songs themselves were tight, lively and punchy. The complexity of the songs did not overwhelm the music, the band moved at a good pace, hit hard when they needed to, had a good sound, etc. etc.

The thing with Instrumental (adj.) is that they’re a band worth seeing. Them and HELU. Like HELU, it was clear that a lot had gone into Insty’s music. They worked hard and played a really good set. Whilst there was personality in there, first and foremost both bands let the music speak. That’s more than can be said for many, many artists out there.

Instrumental (adj.) were a different beast to HELU, but both bands complimented each other really well.
They did well in giving the audience a good gig.

Art as Catharsis runs AAC//107, a monthly music event, in conjunction with 107 and City of Sydney.