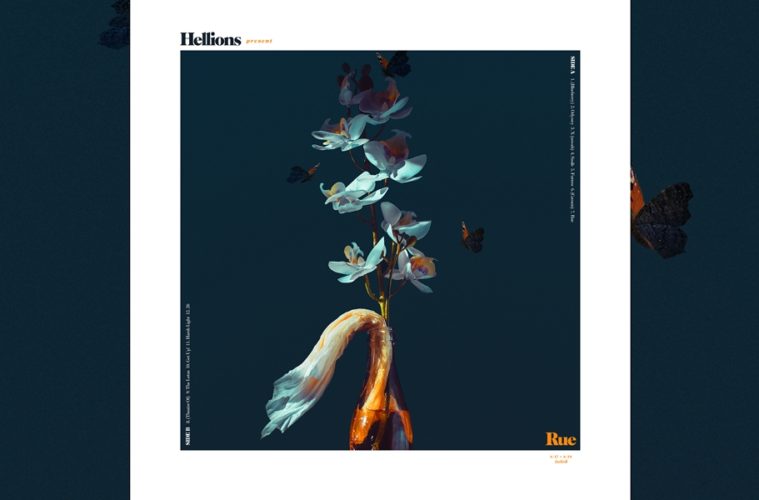 Never a band to do the same thing twice, Sydney crew Hellions have become renowned for their ability to entirely revamp their sound in search of something greater. Similarities exist between all of their releases; from the essential hardcore staple of 2013 Die Young, to the oddity that was 2015’s Indian Summer. Everything that the band had done seemed to lead to their magnum opus, 2016’s Opera Oblivia. Two-and-a-half years later the four-piece have returned with Rue. It might just be their best release yet.

Beginning with “(Blueberry)”, with Rue it becomes abundantly clear just what listeners have gotten themselves into. This is not just an album; it is a drama, maybe a comedy or maybe so much more. If it is just one thing however, it is pure theatre. With the band as your ushers, they guide you to your seat. You can smell popcorn in the air, feel the chewing gum stuck to your seat; it is time for the Hellions extravaganza.

While the band’s previous efforts can be loosely defined as concept albums, there is no doubt that Rue is one. Despite this, the extravagance and outlandishness doesn’t feel forced. The songs resonate personality and the theatrical magnificence of the album does not feel like a façade; it is more often a true reflection of the pure artistry that webs and flows through the band.

From the infectious nature of the album’s more anthemic pieces (“Smile”, “Rue”) to songs that will be staples of the dance floor for years to come (“X (mwah)“, “Get Up!”), the just over thirty-minute run-time holds no dull moments.

The strength of the album comes in its consistency in spite of its diversity; songs intentionally appear jumbled and hectic whilst still maintaining an incredible level of cohesiveness through Hellions’ expert composure. Whilst “Odyssey” sounds like My Chemical Romance on steroids, “Get Up!” buries a 90s pop hit under layers of hardcore and punk, but it all works well together.

The foreplay between Gravolin (guitar/vocals) and Campiao (bass) is enchanting. Bass and guitar flirt with each other, building upon the foundation that Caruso has created through masterful and occasionally unconventional drumming. From this platform Faivre (vocals) is typically gritty. He presents a devastatingly stark contrast from the angelic harmonies that Gravolin (guitar/vocals) lays down. Each member of Hellions gets time to shine and each member make the most out of their time in the spotlight.

Lyrically, Rue can be divided into two distinct categories. Some songs (“Odyssey”, “Furrow”) are slices of pessimism as Hellions struggle to deal with the overwhelming selfishness that the world suffers daily. Others, (“26”, “Harsh Light”) are ballads in celebration of our defining humanity.

Rue is an exploration of an internal struggle; a personal dichotomy the band define as “The co-existence of Jekyll and Hyde operating within a person at any one time”. This is comes through both Hellions’ trademark verbosity and their musicianship. Even more so, the album’s artwork captures the same dynamic. The picture of the flower concurrently wilting and blossoming entirely encapsulates the spirit of the album.

Despite all its dramatic flair and extravagance, Rue is distinctly Hellions. While remarkably different to anything I have ever heard, the sounds that have defined the band over time are unmistakably present. This is most obvious in songs like “The Lotus” and “26”; both of which carry on from where Hellions left off with Opera Oblivia. They don’t depart entirely from their origins; instead they pave a path in between where they have come from and where they want to be.

Heaping more praise on Hellions, the album’s interludes (“(Blueberry)”, “(Cocoon)” and “(Theatre Of)”) are all necessary to Rue. Interludes on previous albums occasionally felt unnecessary; here they seamlessly fit into the album. They play a definitive role in furthering Rue‘s theme and concept by being crucial in maintaining the interwoven narrative. They are triggering to the senses, often evoking flashes of nostalgia and eliciting memories of different sights, scents and tastes.

Rue is an album that deserves more appreciation for what it is than it will probably receive. It is a coming of age for a band that has never stuck to the shadows; a career defining work of art that warrants a stint on Broadway. An enormous risk to take, Hellions deserve praise for taking the dice into their own hands.

Rue is a double six, a strike, a hole in one. Hopefully the album is appreciated more as a work of art than it is just another album. With that being said, I am sure that it will be heard, seen and enjoyed not only by Australian crowds, but also the rest of the world.

Hellions’ Rue is out on October 19th through UNFD. Preorders are available here.