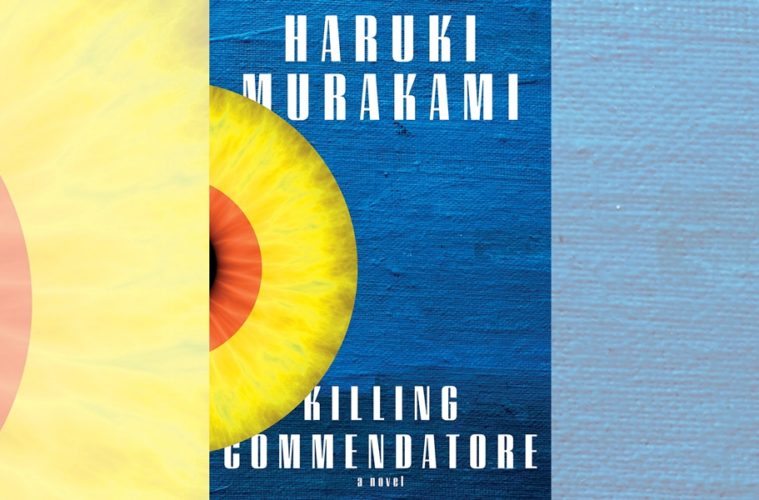 The book opens on the protagonist attempting to capture the likeliness of someone without a face. After trying for a while, the protagonist admits that this is something he is having difficulty with. The commissioner states that they will return at another time before disappearing. This scene suggests significance but it never factors into the story. Well, outside of a follow up from something said off-hand, that is.

Perhaps opening scene was meant to function as a framing device, or give a sense of return to normality at the story’s conclusion. However, the scene is never revisited, serves no real purpose and feels like a leftover from an earlier version of the book.

Killing Commendatore‘s real introduction concerns the main character moving out form the city and eventually moving to the country with assistance from a friend. He separates from his wife. He then drives around a bit until, with the help of a friend, moves into his friend’s dad’s old place. Due to dementia, the father ends up in a retirement home and the old home needed a caretaker.

It’s from here where the story actually kicks off. Kind of.

There’s a number of places in Killing Commendatore where the story begins. The protagonist getting commissioned by a mysterious commissioner is the easiest point to begin drawing a running thread.

Everything prior is more of a preamble. It’s not welcome nor unwelcome. That said, everything prior does occasionally have bearing on the plot and the main character’s thoughts and feelings. It’s more that it’s just kind of there than it is something significant.

Prior to this the main protagonist is having trouble painting. It probably serves as an allegory for Murakami when he came to approach this book.

Whilst following a main thread, Killing Commendatore also delves into the life of Tomohiko Amada (the prior-mentioned Japanese painting painter) as the protagonist (with assistance) tries to work out some of the reasons behind some of his actions through his life.

The majority of the narrative is passive and matter-of-fact. Things just kind of happen. The main character feels more like an observer than an actual participant in the events as he reports them flatly and seems to have little to no agency as a character. It’s as though he has no control at all and is merely an unwilling participant. How like life.

Generally the story flows pretty smoothly. However, too much of it comes off as sterile and flat. There’s a number of things that get that kind of focus that will imply something hidden that will later be revealed. Often these things don’t see a follow up.

There’s a point where the main character gets urged to take action. He is continually told that there isn’t much time. However, for all the rush it takes a while to happen. There’s meant to be a sense of urgency; that much is clear. It isn’t there though.

Earlier on the protagonist is hurrying at a pace that could suggest running. Whilst this is happening, he has the time to describe the pattern cast upon his body by moonlit branches. I understand that his having an eye for detail and a good memory would probably come into play here. Again, the sense of urgency isn’t there. The protagonist has the time to describe something that, given the situation, I imagine is something that they would not have been paying attention to.

At one point a character mentions a name that they should not know and then brushes it off with no real follow up. Aside from maybe a couple of lines it never comes up again and has no bearing on the outcome of the story.

Now this might all seem a bit nit picky, but these are things that compound on each other as the book goes on. Some threads are left dangling, and the ending is both sudden and ridiculously convenient. But then again, maybe this is all meant to be a reflection of things in real life. You don’t always get to find out what you want to find out. You don’t always get to see things come to a satisfying conclusion. Maybe.

To speak from a strictly personal view, I didn’t feel drawn in. Most of the time I was too aware that I was reading a book. There was one section where I was being drawn in. However, the dissolution of tension commenced once I remembered that what I was reading was a recount of events.

That all said, Haruki Murakami does write well. Despite boredom at times, I simultaneously felt engaged. Things do glide by pretty easily. The problem is that the book is not well-written. It has flaws. Some are significant.

When the protagonist is talking about his dead sister’s breasts and about how they were developing and wouldn’t develop further now seeing as she died, then that doesn’t make for something great to read. It could be metaphorical. It could be allegorical. When people have relatives die at a young age it can have a pretty serious impact on their lives. However, I don’t think that was what was being conveyed. I don’t think this as there’s a line trying to justify the observation. It comes off more as an afterthought rather than a justification.

I also have trouble believing that a young girl would have no issue discussing their lack of breasts with what is essentially a stranger. There are plenty of different people out there so it’s not entirely unbelievable. However, in combination with how the book was written I couldn’t believe that this and everything else I was reading could happen.

As an aside, I believe Murakami’s works see accurate translations. However, I can’t help but feel that some of Murakami’s intent and meaning may have been lost during the translation process. It makes me wonder how much of my criticisms are based on the translation and not the content.

A book called The 34 Mysteries of Haruki Murakami Killing Commendatore came out recently. I imagine that it helps to get a bit more in depth about a number of things in Killing Commendatore. Whether it’s official or not, I cannot say, but I still believe that it does help. However, unless you speak Japanese you’ll have to wait for a translation.

One thing I won’t fault Killing Commendatore for is the way the main plot and the exploration of Tomohiko Amada’s life come together. The narratives intertwine in an interesting way that I found satisfying. It was one of the few satisfying things in the book.

Obviously owning a book doesn’t mean you automatically understand its meaning and nuance. Not everything needs to have answers. The problem with Killing Commendatore is that it feels bloated and unfinished. At least one hundred pages could have been dropped without any loss. There is a logical progression to events and the main story makes enough sense. There are plenty of parts that suggest build up and go nowhere. At times there seems to be the implication of meaning without intent.

Killing Commendatore left me with questions, which is good. However, most of the ones I have involve asking about the writing and plot devices.

There is a good book in there; The writing is good, but it could have been better.