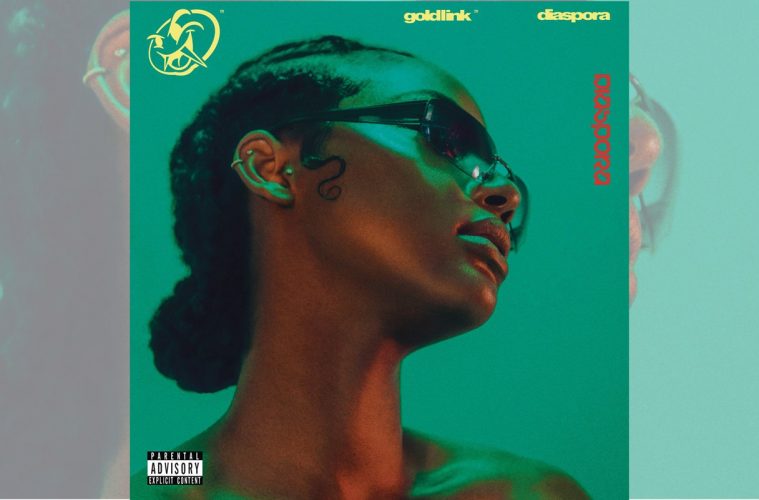 GoldLink put out Diaspora last year. I’m not sure as to why it took so long for me to get around to writing about it, but here we are.

On Diaspora it seems as though GoldLink employed the idea of diaspora as a musical concept; as such, there’s a few different styles of music and artists throughout the album. This had the potential to come out sounding a messy mishmash of ideas, but just about everything clicks quite well.

As Diaspora is a guest-heavy album the songs rely a lot on what they bring to the proverbial table; It’s here where the album is at both its strongest and its weakest. Rather than dominate everything, GoldLink is much more willing to let the guests deliver; Allowing them to do so gives the album a greater sense of variability. There’s a flexibility with how each guest works with each other, as well as the underlying music, allowing for a decent flow and and cohesive feel. At the same time the album doesn’t quite feel as collaborative as perhaps it should. There’s a sense of disconnect in a way that seems like the artists aren’t really bouncing off of each other; often it seems like a “wait your turn” type affair.

Perhaps that disconnect wouldn’t be there if GoldLink was more willing to step up, though to be fair, he does put in an ample appearance. Furthermore, if he had made himself more visible, then the conceptual approach would suffer as the album would sound more nakedly singular.

That said, the artists put in quite the effort. The flow works well and everyone is quite tasteful for where they appear. There’s a veritable amount of skill coming forward that helps bring the songs to life. No one lags or struggles, and no one sounds dull or uninterested in what they’re doing.

As far as everything outside of the vocals goes, it’s all smooth sailing. Diaspora has this rolling, pumping energy that gives the whole album a fun and celebratory vibe. Even in the more relaxed and quieter moments the energy keeps on going. the vocals capitalise on it at all the right moments, keeping things rolling forward whilst elevating the performances a fair bit.

The songs are somewhere around minimal; there’s enough for structure and thrust whilst leaving a lot of space so vocals don’t have to fight for attention. As such, there’s a lot of quieter, muted sounds spread throughout Diaspora, so when there’s something a bit louder than the norm it easily draws attention. The overall effect is that the songs feel much fuller than if they were “every moment full of everything plus vocals”. There’s a balance and everything locks in nicely.

That doesn’t really say much about Diaspora overall, which is a really tight album. “Days Like These”, “Zulu Screams”, “Spanish Song” and “Swoosh” are all great songs, but so are the rest. The album feels much like a gathering of its influences and sounds rather than a layering; Everything blends together in a most pleasing and satisfying way. There’s a style to the whole thing that is all GoldLink’s own; even when someone else is in the spotlight. On both a conceptual and non-conceptual level, Diaspora sees that style shifting without sounding narrow or singular. It incorporates, grows and expands whilst providing a satisfying listening experience.