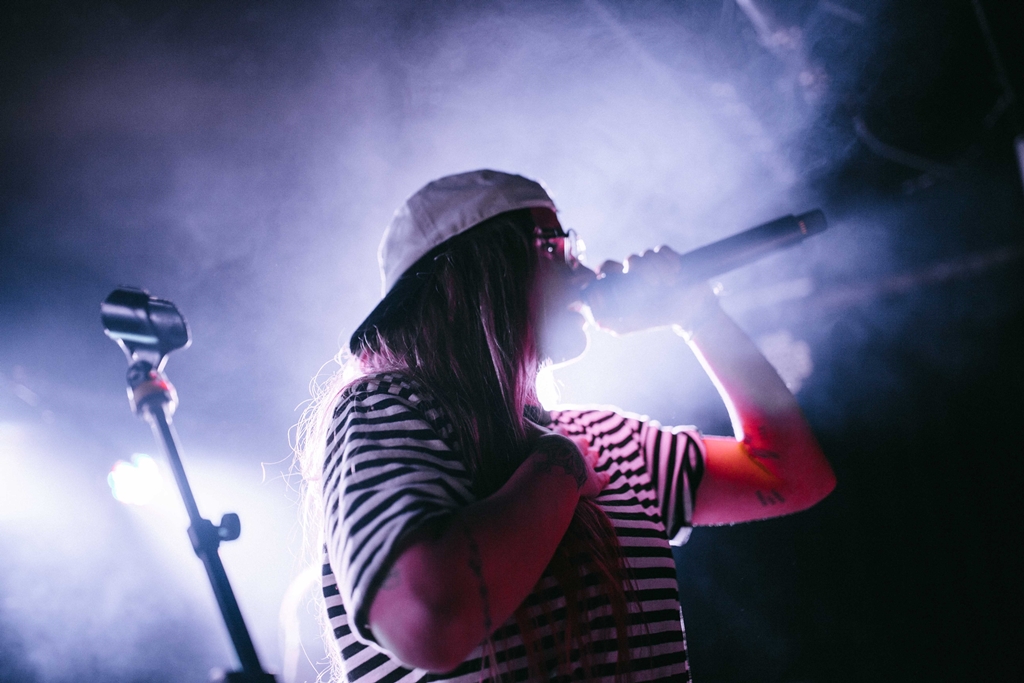 On Thursday the 14th of September at The Lansdowne in Sydney I clocked my 63rd, and favourite show of the year. G Flip, aka Georgia Flipo, is one of the most phenomenal acts I have seen in a long time. I get the pleasure of spanning every musical genre with my photography. From Aussie Hip Hop to Metal to Surf Rock, I love it all. The only downside to catching all this amazing live music is that it often takes a while to discover something that really stands out.

I went into the show knowing G Flip as this artist that suddenly blew up on Triple J. With only two songs released to the public (‘About You’ and ‘Killing My Time’), and not an extensive history of live performances, I was very skeptical as to how this success was going to translate into a headlining set. From the moment G Flip stepped onto stage it became obvious that she was ready to put on a show. The prior musical experience and genuine love for playing radiated out to the crowd.

The support for the night was Sydney’s four piece Erthlings. They stunned the crowd with not only their dream pop sound but also their age. None of the band members were over the age of 15, but they held skill beyond their years. Their set featured their latest single ‘Bridges’ a song about burning bridges and moving on. It had the whole crowd bopping their heads and grooving along. It’s no wonder that the band has signed to Future Classic alongside other Australian artists such as Wafia, Ta-Ku, Flume and of course G Flip herself.

Georgia shared the amazement about their age with the crowd. She topped it off by sharing her own experiences as a 15 year old which included ‘melting stuff’ and getting in trouble from her mother; overall just being a 15 year old. Casual banter with no awkwardness filled the gaps between songs – something a lot of bands struggle with. G Flip has the amazing ability to relate the crowd. She gives an overall sense that you’re just watching a mate play.

As well as giving us insight into her younger years, G Flip shared the formation of her band’s story. She had previously toured with ‘Toothpick’ (bass) and he was main encouragement for her solo work. She discussed meeting ‘The Electric Ferntree’ (drums), then closed the story with ‘and we’ve been three best friends since’. The dynamic of an artist and their band is very important. The trio’s effortless ability to play off one another while seamlessly swapping instruments made it one hell of a performance.

As much as I liked ‘About You’ and ‘Killing My Time’, the new songs G Flip previewed at her headline are something else. G Flip effortlessly swaps to playing every instrument on stage for performing the new tracks.

As the set approached it close, Georgia went solo for a new track titled ‘Stupid’. ‘Stupid’ is beautifully raw, showing a more vulnerable side of G Flip as well as highlighting her excellent vocal range. The whole room was quiet, just captivated within Georgia’s every word.

G Flip also played a new song titled ‘Drunk Too Much’. She prefaced it as ‘the only drunk song I wrote that’s any good’. The song was insanely catchy and had an amazing bass line. It’s the kinda song you’re gonna be blasting at house parties. It’s going to be the soundtrack to numerous late nights when it finally drops.

Traditionally being a photographer, it’s hard to have my words capture a show but I couldn’t leave this gig without talking about it. G Flip is one of the best artists I have seen in a long time. I can’t wait to see what is next for her.