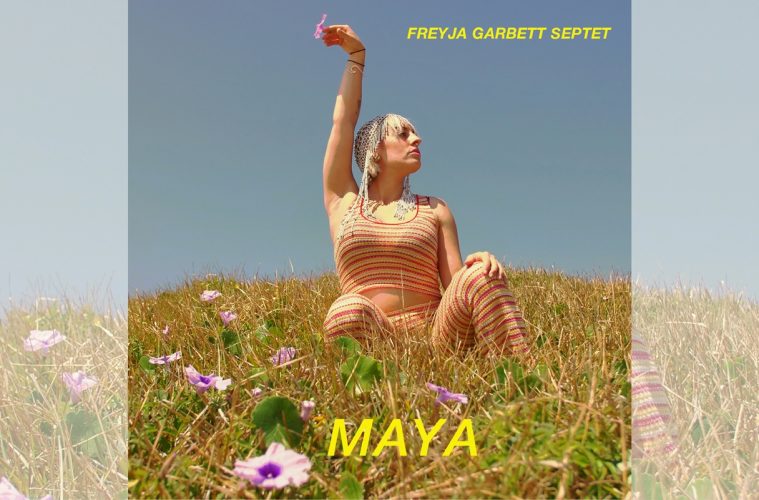 This is Freyja Garbett’s debut album (as far as I’m aware). What you’ve got on MAYA is a series of songs in a sequential order that Freyja Garbett wrote. They mostly pertain to the sounds of jazz, but there’s a bit of experimenting and pushing outward.

“Quiet Perceiver” begins MAYA soft at first. Oscillating, gentle sounds form a bass, then the brass comes in and gives the melody more form. Light and quick percussion comes in as other sounds reform themselves. There’s a hint of mystery; a hint of something else. Suddenly the song becomes something else, though of the same world as the prior section.

The song continues on shifting through different sections until it reaches its percussion and synth-heavy closing that seems almost ready to explode, though instead of doing so, a quiet grunt followed by a quick brass punctuation brings “Quiet Perceiver” to a sudden end.

“Otford” is significantly calmer and more linear. Through gentle guitar and cymbal-heavy percussion it captures the imagery and feel of that area quite well; it breathes, loosens and relaxes, and feels as serene as its namesake often can. It also gives time to wind down from “Quiet Perceiver” in an effective manner.

There are two more songs that are most familiar to “Quiet Perceiver” and “Otford”; “Sharks Need Love Too” and “Afro Beast”. “Sharks Need Love Too” is the only song on MAYA to feature vocals. They alternate between a highly-rhythmic speaking of “If I’m a great white why am I so blue? There’s an ocean between that I can see through” and a quick rap that might regard the impacts of consumption; it’s not exactly clear. Both vocals build and sit nicely on the slightly-downbeat music, which has something rather city-like to it, but at the same time suggests a wide open area of ocean.

“Afro Beast” takes influence from Afrobeat and plays with it a little. It opens smoothly and seems to be asking some sort of vague question. Light synth and light guitar make most of the work here, though there is some shuffling drums. An implied loud section comes for a brief period followed by something a bit more funky in sound. There’s a bit of brass, then more implied loudness, then a return to the funky section focusing on (what I think is) organ. The percussion often remains soft, though gets to break out a few times; especially during the slinky guitar solo. Regardless of whether there was questioning and answering on the song, “Afro Beast” feels like a small kind of journey, though not necessarily of the traveling variety.

Outside of these the songs are more familiar when it comes to sound, though that doesn’t make them any less interesting.

“Bulga” starts off chilled out and gentle before becoming more lively and funky. “Maya” also alternates between relaxed and lively, but explores a bit more. “Masong” slows down more than the other songs and carries with it a sense of mystery. “Grassy Knoll” picks the pace up a little and maintains a mostly steady form and joyous sound. “Edu-k-shun” continues the joyous sound, but also carries a slight undercurrent of tension. “The Link” closes the album with relaxed, light piano-driven music that seems like it’s reflective of without necessarily lingering on that reflection.

The strongest part of MAYA lies in its performative aspect as the whole group sound much like a sleek, passionate unit. They’re tight to a T and just glide through everything with ease. There are moments of highlighting, but little, if any performer sounds like they’re trying to hog time. It’s likely in part due to the firm structure of the songs. Perhaps there was room for improvising; if there was it’s not exactly apparent. These are songs for playing in what seems like a very specific way; at least, as far as the studio versions of them are concerned.

“Quiet Perceiver” might not have been the best song to start MAYA off with as whilst it captures a sense of the spirit and the process of the album, it’s quite removed from what comes after. That said, the rest of the album flows quite well. There’s a strong sense of exploration and liveliness contained within a slick, refined framework. It’s an album that is classically jazz, so to speak, as well as an overall strong debut full of wonderful music.