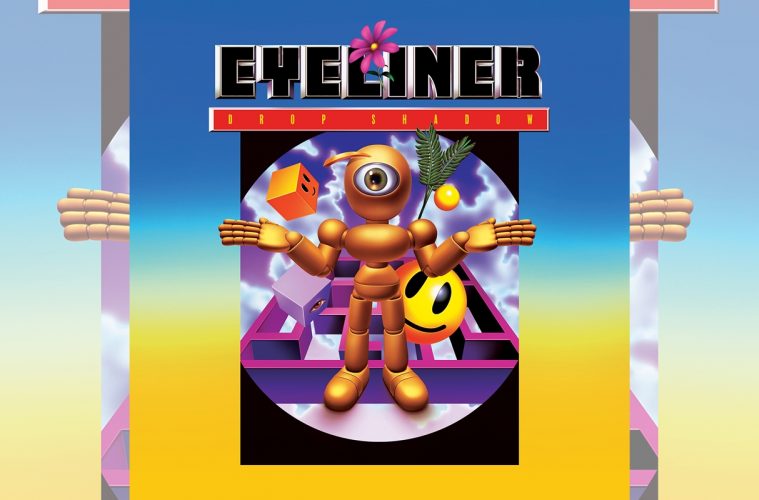 Drop Shadow: The (currently) most recent release under the Eyeliner moniker; a moniker used to explore alternate modes and moods of the expression of sound in order to further the goal of extending the medium of connection by producing vibrations perceived by bones and eventually translated into something perceived as “sound”.

In these endeavours to explore that which is and that which may be not, Drop Shadow goes the only way that it truly can in order to find what sound style can best carry the waves of tomorrow into the ears of today: MIDI.

Oft it is a cruel irony that MIDI sounds exist within. Frequently derided, disparaged, denigrated and decried as a  pale imitation of an approximation of “the real thing” through sounds readily associated with it, yet unknowingly appreciated and respected due to its ability to fill out space in a vast, amorphic and enduring landscape due to its flexibility; especially when contained within the constraints of the song format. As such, there is a lot that MIDI often does without any sense of suspicion from the listener.

However, rather than vindicate its legitimacy as a way of creating sounds to the cultured masses through the use of sampled sounds in a way that cries angst and shouts torment into the haunted heart of society, creating grand orchestras that have the same kind of poignancy as, say, Bartok, instead Luke Rowell does what he can to vindicate its legitimacy by taking the most synthesised of sounds and crafting an album that evokes an era many hold a deep-seeded nostalgia for. We return to times often considered simpler, though they most certainly weren’t; it’s just an ideal we embrace in order to better reconcile the occurrences of the current era against its expectations.

In that regard Drop Shadow might attempt to freeze time for a moment, though it exists as an album experienced as time flows forward at a rate of one second of time per second of time. At the same time, in terms of narrative the album’s tracks seem to span a period of time truncated to the limitations of its own format; whilst the passing of time occurs during listening to the album, the compressed expression of time allows for experiencing time at two different rates.

Partially due to this, eventually Drop Shadow must come to an end, but before that, how does it begin? With the mood and image piece known as “Los Angeles”.

It is here where Luke Rowell most appropriately announces this era of Eyeliner. The initial formations of perhaps an idealised metropolis appear, quickly growing into a suggested image. Spaced notes ring out into the air, preparing for something bigger. The beat finds its place, the groove begins and the song starts gliding along. It all feels good. It feels cooool in its movement and sets a tone, sound-wise, for what follows.

Of course it would be remiss to ignore that the rest of Drop Shadow follows suit to an extent; Not every track looks to paint the same scene or provide the same mood. Rather than follow the opener with something highly energetic, the gentle “American Beach” comes next. What normally might be the opener, or perhaps even a middle track comes second here; Its peaceful flow shifts the energy and reveals the entryway to the album’s remainder. Dare you enter it? Perhaps the answer is yes.

Finding a middle ground between the first two tracks, “Contact” speaks of something slow and supple. It’s warm, comforting and holds a steady, firm groove. Synth sounds awash with a sense of something passionately expressed call outward. There’s something sad and touching here, but there’s no wallowing.

This sense of expression continues through “Promise”, reaching its first peak in “Keep Calm”. At first it is quiet and pensive. Eventually a chaotic saxophone gains footing until the hard, firm sound of what might be piano firmly and suddenly shifts the nature of the experience. Vocals rise out in response and this remains the time to keep calm and listen to the waves gently lapping against the sand.

At this point Drop Shadow feels much like it has moved from day and into the evening. Through this it has carried a heartfelt and perhaps bittersweet feel in places. Of course that could be something inherent to what we attach to music of this kind, but it remains something difficult to dismiss. There is a strong suggestion of something heavier behind the sounds; Even though there is a sense of fun in the songs, that suggestion remains difficult to shake.

At “Carry On” the mood lightens up and the album moves into a new realm of existence. The sounds of an era’s funk and pop remain dominant but the melodies become less weighted and more uplifting without losing substance. In this process the slow jam of “Coffee News” finds itself neatly positioned before the two title tracks; both of which almost feel as though they are a mirror of each other, and perhaps they are.

Following these once more beatless composition returns. At this point Drop Shadow is past midnight, or perhaps just before it and, in a sense, winding down. “Invisible Mask” holds a sense of longing, as well as a tension that gradually builds and releases. However, it does not look for intensity or heavy grief, but rather finds a slight sense of peace and calm; both of which come forward more so in the atmospheric and moody “Potpourri”. Both tracks sound as though they’re looking inward and by the time they finish we’re a bit closer to daylight.

The beat returns in “Quiet Keyboard”, as well as the sense of daytime. Phrased in terms of a new day, the song carries itself forward in an upbeat manner. However, all is not completely upbeat and that bittersweet sensation remains, lingering through the melody.

It is fitting then that Drop Shadow now finds itself away from the beginning and commences its final track. “Reverie” holds itself as an emotional piece whilst concluding what came before; Sounds of the past brought into the future of the present as a medium for expression. Steady, sturdy, strong and yet gentle, and perhaps more cathartic and climactic than originally implied. The spaced sounds keep the song joyous, refusing to collapse under the weight of prior compositions. It understands those previous shapes and moods, but it strides forward. It looks toward an uncertain future with confidence.

Hearing these songs recorded using a set of “organic” sounds might be interesting, but there likely would be something lost. Perhaps there wouldn’t, but it’s hard to deny that the specific use of MIDI gives Drop Shadow a certain shape. It creates a debt to the past; at the same time the album that looks forward. Perhaps due to the use of MIDI Drop Shadow is easy to dismiss to the svelte gestalt listener’s ears. However, they only serve to cheat themselves out of discovery, for this album is more than just a sound collection; it expresses something Luke Rowell feels in a much more tasteful and eloquent way than a surface listen could ever suggest.