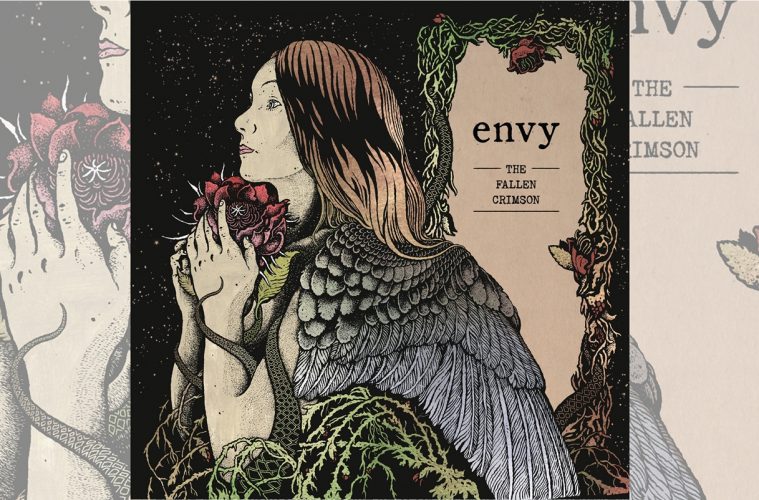 There’s little time wasted with “Statement of Freedom”. Befitting of its name, the song sounds very much like a statement. It’s big and crunchy, and holds an emotional climax that fits quite nicely. The song is quite sudden and immediate; it’s the sound of Envy being a leaner and more aggressive band.

The sense of immediacy comes through quite a lot of The Fallen Crimson. Envy still explore and the songs remain dynamic, but they’re more direct and urgent rather than indirect and gradual. It sounds as though Envy were looking to capture a sense of the moment, or maybe they were looking to lean more on the hardcore than the post; perhaps it was both, or neither.

“Swaying Leaves and Scattering Breath” follows “Statement of Freedom” with a greater interplay from both feel and dynamics. There’s a bit more quiet and sense of melancholy, but overall the song feels quite festive and lively. It’s a song not willing to linger; Each section is just long enough to let the feelings permeate before moving onto the next.

At this point it’s two songs in and whilst it feels slightly different, it also feels very much like Envy. “A Faint New World” still feels like Envy, but sounds much more like a progression in sound than the prior songs. It starts off kind of soft, letting a sense of unease build. The spoken vocals give way to screams, the instruments get louder and more rhythmic, and something sounding like a voice slightly elongates notes as it follows behind the band. Eventually the gears switch to something sounding a little faster and tense which begets one of Envy’s most jagged, stabbing and intense bits of music they’ve recorded. the brief passage makes a large impact before the song switches back to something more familiar as it moves toward its close.

“Rhythm” sees Tetsuya Fukugawa taking a vocal sideline for someone else. It’s a thicker vocal that enhances the song’s prettiness. The vocals seem to follow the instrumentation in that they slowly build from something sounding tender and fragile into something overtly dramatic and grandiose. It’s an emotive performance from Envy, but it’s a song that’s a little too by-the-numbers. The band play it well but its a song that most other bands of their ilk could’ve done.

“HIKARI” is one the more beautiful songs Envy have recorded. It does the quiet, tender thing before switching to being loud, though it remains tender throughout. The song’s performed with a kind of heaving, pulling playing that enhances the melody and emotional feel by quite a lot more than describing it suggests.

Tetsuya Fukugawa speaks his words in a way that feels as though he’s trying to get something important across without much time to do so. His spoken tone shifts until it’s no longer enough, so he switches to his scream; It’s almost as though he has no choice. Everyone else keeps on building on the song’s mass, leading to an almost-overwhelming sense of catharsis.

As far as The Fallen Crimson‘s performance aspect goes… well, it’s a real treat as Envy play with much passion. The guitars alternate between the gentle and raging with ease whilst the bass keeps them well-anchored. Unsurprisingly Tetsuya Fukugawa’s spoken and screamed vocals are as strong as ever. There is some brief singing that works for when it appears, but otherwise he sticks to his usual style.

Often the percussion is great. It has a feeling of bigness, and sounds tight and energetic, but there are times when Hiroki Watanabe overplays, such as on “Eternal Memories and Reincarnation”. The song has this gliding quality to it, but for some reason the percussion is really rigid and adding a bit too much. Even when it slows down and allows a bit more space, it still remains rigid. Everything else about the song is fine. It has a melancholic and pensive feel, but the percussion doesn’t let that come through as well as it should.

On the following “Fingerprint Mark” which seems kind of reflective of “Eternal Memories and Reincarnation” Hiroki cuts loose, but so does everyone. It’s a blistering slice of hardcore that demands everyone goes all in. However, Hiroki manages to overplay on this one too. It’s not as much of an issue here, but in the song’s quieter section he’s taking from it by doing far more than necessary. It creates clutter on an otherwise great song. There are other places, but it’s on these two songs where the overplaying is most noticeable.

The two songs from 2018′s Alnair in August – “Dawn and Gaze” and “Marginalized Thread” – really belong to this album. “Marginalized Thread” is a sleek, energetic work that moves quickly whilst still carrying a sense of journeying; “Dawn and Gaze” tugs a little at the heartstrings whilst carrying a sense of comfort and triumph. The songs sound little brighter than when they originally came out, but they fit right in. Not having them here would’ve been a loss to the album.

“A Step in the Morning Glow” is a slow, massive and weighty closer with a strong sense of drive and purpose. The song sounds both climactic and definitive the whole way through, even when it lets up to let in some breathing space. It’s a great song to close on as it sounds quite conclusive to the listening experience.

Envy have the luxury of staying power. I think part of that they always sound like they’re giving it it their all, whether it be live or on record. They clearly work hard on their music and it pays off. I also think that their staying power is due to their ability to create emotive content that sounds genuine; something The Fallen Crimson shows with ease. They’re also a band often at their best when they’re wandering; something The Fallen Crimson also shows, but on a narrower path than usual.

Some of Envy’s finest work thus far is on The Fallen Crimson. It’s an urgent, expressive and touching record. At times Envy play things a little too safe and there some slight issues, but overall the album delivers, and then some.

The Fallen Crimson is available here.