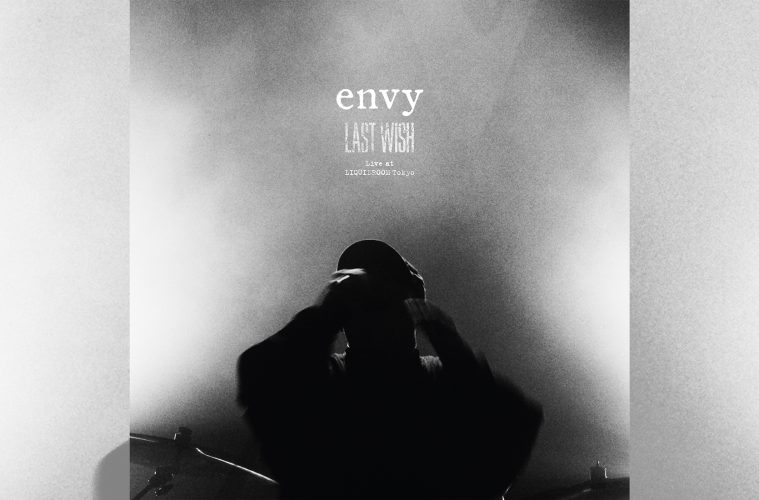 Last year after the release of The Fallen Crimson Envy played a show in support of the album at LIQUIDROOM. Unfortunately no shows followed due to much of the music scene as a gig-based performative method going into forced hibernation. As it had turned out Envy recorded the show and then released it as LAST WISH | Live at LIQUIDROOM Tokyo.

Live albums seem like a tricky thing, often functioning more as a document suggesting rather than stating. The recording can come through tinny or muddy when the performance was quite full and clear; The inverse is also possible.

Sometimes a live album works in its presentation of songs, providing great contrast if there is enough shift between studio and live and can end up considered as key listening in a discography. Sometimes the songs presented end up sounding better than they were when recorded in a studio due to various factors. In general it seems that live albums work better when showing musicians in a state of transition rather than in attempts at capturing and canonising a solid performance, but this is all rambling and I’m getting ahead of myself.

So probably the first thing to note about LAST WISH | Live at LIQUIDROOM Tokyo is that the set list mostly focuses on The Fallen Crimson, likely due to that being the most recent studio album at the time. Do the featured songs work in a live setting?

The implication is “yes”.

“Statement of Freedom” kicks things off, though not without what feels like a sample of “Zero” first. Then there’s a bit of tense guitar buildup; Gets loud and menacing and Envy keep building before launching into the song proper. It’s not as though it was necessary; it almost feels like a tautology, but it is a good start to the set.

Many of the songs sound fine enough; they’ve a bit of grit, dirt and room as the songs sound more bottom-heavy and muddy, but also more biting. There’s also a sense of liveliness which, considering Envy are a lively band, is both unsurprising and welcome.

“A Faint New World” loses a bit of its impact but still makes good use of playing with tension; “Marginalized Thread” is a bit more indistinct, though the main melody still comes through; “Fingerprint Mark” remains blistering and energetic; “HIKARI” still sounds emotional, though it feels held back from peaking. The electronic vocal sound it has is also much more prominent here and gets a bit distracting in places; Its presence on “Dawn and Gaze” can get incredibly grating due to how much more at the forefront it is than on the studio version. However, it works better on “A Step in the Morning Glow”.

The songs not from The Fallen Crimson work well as part of the set; “A Warm Room” especially, which here feels like a come down from the climactic “A Step in the Morning Glow”… almost. At first “A Warm Room” does wind things down a bit. Then it brings everything to a greater, almost celebratory climax that caps the album off really well.

“Footsteps In The Distance” sounds great, and the vocoding on some of the vocals provides a contrast whilst still fitting in a strange way. The additional guitar gives the song a bit more depth, but it’s difficult to tell if it’s adding too much or just the right amount. Still, the song has a great sense of shift and flow here. There’s a way that it seems to pleasantly rage as it gets bigger without going too far.

Unfortunately whilst “Left Hand” has a lot of energy behind it, it lacks much of the clarity necessary for the song to be effective. That said, “Go Mad And Mark” shows Envy hitting some pleasing highs, especially in the way the song seems to sway, and its quiet sections remain as pretty here as they always have, though at the same time they feel a bit lacking.

What you’re getting with LAST WISH | Live at LIQUIDROOM Tokyo is a document of a band early in a touring cycle. Whilst Envy sound massive and dynamic, too often the songs become flat in sound. Envy seldom (if ever) put on a bad performance and this certainly is a good one. Some parts are tight, some are loose but the songs still work together. Perhaps a super tight performance may have elevated the material more. However, most of the problems with the album come down to how it sounds rather than anything Envy are doing.

Had Envy been able to tour, would they have used this show? I don’t want to say that this album shouldn’t exist as I don’t think it shouldn’t. It’s not a simple live album; at the very least, it seems to be worth something more than just a cynical stopgap release. There’s an intent behind this to provide something to the fans that’s appreciative. However, I can’t help but think that if they had been able to tour in full, then Envy may have used a different show. Maybe they would have used this one and a few others.

Speculation aside, whilst not a key release, LAST WISH | Live at LIQUIDROOM Tokyo still is a nice set to hear.