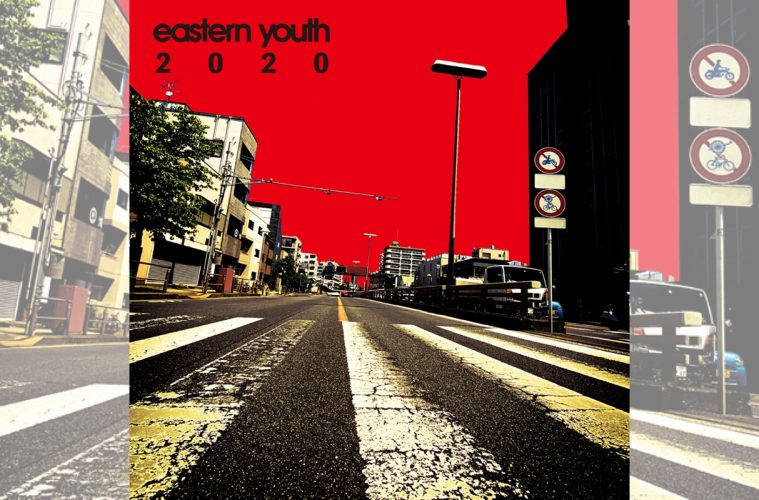 Eastern Youth are back at it again! With 2020 being their first album since their last album, once more the band embrace melody, emotion and rich sound in order to produce the music they produce.

As Eastern Youth have progressed they’ve expanded as a band whilst easily maintaining a core sound. Often you know what you’ll get with one of their albums; driving, pumping music, thick and hard-hitting in sound, with a great deal of emotional content. Occasional simple-sounding stuff that belies an intricacy that deepens their music without overloading. And so on.

As such 2020 follows much in the same vein. Predominantly heartfelt vocals add to the emotional melodies; Tight performances help create a hard-hitting sound. However, this time around there’s (perhaps) a bit more focus on melody, as well as a slightly slower pace to some of the songs.

That said, very, very little of the album is laid-back; most moments of which pertain to initial passages. “月に手を伸ばせ” (“Tsukini Tewo Nobase”) is fine with playing with expectations before turning into something a bit more lively and anthemic, as is “夜を歩く” (“Yoruwo Aruko”). These two songs do a fine job of implying something before switching around whilst keeping those quieter parts feeling like they belong.

” 今日も続いていく ” (“Kyoumo Tsuzutieyuku”) also makes use of a quiet start, but keeps it very brief. Drums suddenly come in, guitar rings out, a brief solo plays, then things kind of pull back. There’s a kind of quiet, direct and pointed delivery in the vocals that rises into an outright impassioned delivery, matching the music as it strikes out. The song stays at this level most of the way through until it reaches the end where it finishes similarly to how it started.

Other songs stand out well though for other reasons. “明日の墓場をなんで知ろ” (“Asuno Hakabawo Nande Shiro”) has a great rolling, driving thrust to it and makes great use of its noise to really fill out whilst keeping the song feeling uplifting; Closer “あちらこちらイノチガケ” (“Achirakochira Inochikage”) wraps the album up rather conclusively. It doesn’t deviate from prior tracks, has a great sense of certainty and precision and keeps things moving forward the whole way through.

In some ways 2020 sounds “fresh”. Whilst Eastern Youth have been at it for a while, they still get right into their music with a great deal of energy and enthusiasm, even during the slower parts. Doing so helps to keep their music feeling lively whilst creating an emotional connection. However, in some places the album is flawed. It’s not due to any of the songs being bad; far from it. Individually the songs are great; whilst together some parts drag, all the songs sound much like they belong with each other. It’s that, considering Eastern Youth’s predilection for emotional content, there’s more than a few times when songs become overly saccharine. In places it becomes distracting and tiring, harming the meaning within the songs.

That said, it’s difficult to fault the band for how well they’ve crafted 2020. The album overall is highly competent and engaging, and rich in melody and passion. When it connects, it connects well and provides a genuine uplifting feel. It’s a great album from a band still putting their all into their music.