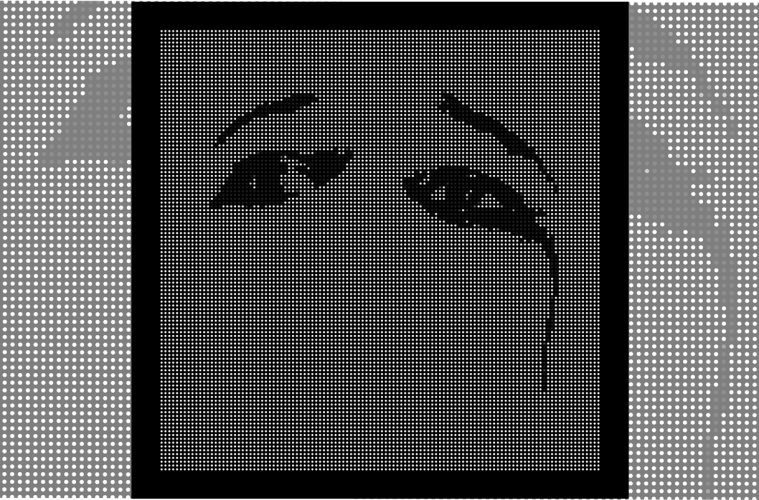 “Genesis” begins Ohms with a buzzing and slightly wobbling synth. Echoing guitar notes come to meet it. It’s ominous, but it does not last. A short count and Deftones come in at full force and just belt it out. The synth keeps going in the background, helping to keep the song sounding brooding. The vocals alternate between a sort of drifting and sharp scream. When it comes to the chorus there’s a sense of rising up, if only for a moment and the song maintains its weighty, crushed sound.

So what is Ohms full of? Guitar playing that helps build rhythm. Bass that locks into the guitar and percussion, providing a great bridge. Groovy and snappy percussion keeping the structure strong and smooth. Vocals that range from a shrieking scream to a floating, dreamlike and emotive stretch of sorts. Heaviness begetting beauty. A whole bunch of stuff that Deftones touch on that help make a Deftones album a Deftones album.

What’s really nice about Ohms is the greater presence of synth. Usually Deftones the synth sits somewhere either behind everything or somewhere in the middle. Sometimes its more prominent, but it mostly serves in a passive role. You may not always notice it, but you’d notice it if it wasn’t there. On Ohms synth is much more present, though still in similar capacity as on prior albums. Often it fills space with something ambient and helps set and define mood well; sometimes it adds a slight touch added to the top of a note, almost as though it’s a quick poke. Occasionally it sounds like the synth rides the music to wherever it leads. Regardless, it effectively brings out definition and texture well by widening the songs that little bit more through a more active-sounding role.

As expected, Deftones put in a good deal of work into this album. Both “Ceremony” and “Urantia” sees the band driving on forward in a highly rhythmic capacity. “Ceremony” plays with building sound; “Urantia” with jagged, aggressive riffing in a non-aggressive framework, but both feel like the band really pushing rhythmic flow above all.

“Error” sees Deftones shift gear into something more… bouncy. Chino floats over a more harsh-sounding riff, but of course the song changes around a bit and there’s the dreamy stuff in there that Deftones can’t get enough of. Things become overtly melodic in the choruses and the song ends with something that feels “cathartic” that, whilst appreciated, can feel like it drags a little too long.

“The Spell of Mathematics” is much more dark and brooding in comparison; at least, in terms of sound. The rhythmic chug is low, heavy, “slow” and menacing; Vocals sit somewhere above it all mostly stay harsh and pointed. In the less full-on sections the atmosphere from what came before lingers on, keeping the mood consistent. Everything’s a bit “lighter” and the vocals soften, but it feels no less weighted. The song ends (after a few returns of a “reflection” of the opening riff) with what sounds like a finger snapping / clap combination that allows a sense of calmness to creep in as instruments slowly drop out, but once more things drag on a little too long. It’s not unwelcome, and at times you can sort of lose yourself in it, but a bit of brevity may have helped.

By this point Ohms has sounded quite straightforward; more so than usual for Deftones. “Pompeji” keeps going by playing with Deftones’ prettiness and heaviness. The quiet moments have an air of tension; the sudden shifts into overtly heavy groove bring forth a sense of violence. Then the choruses combine the two, creating an odd sense of reprieve. It’s kind of “off”, but the mood settles early on and remains reinforced to great effect. Toward the song’s end something more mournful in sound comes forth, as though it’s a scene overlooking a tragic aftermath. Here it works well as it feels earned rather than just added.

This leads into the opening pulsing synth and guitar scrape of “This Link is Dead” which is one of Ohms‘ strongest songs by far. The escalating guitar along with the screaming and snappy, deft and agile drumming creates this really harsh, intense energy. It’s full-on until chorus sections come in. Here the song becomes this sort of sludgy, groovy thing. Overall it’s a song that sort of sounds chaotic which belies just how linearly focused it is; it sounds like Deftones are wildly lashing out and purging, but focus and control keep things to the point.

A throbbing, stabbing bass drives most of “Radiant City” forward. Chino once again alternates between rough and dreamlike and once again there’s a strong focus on rhythm, though here it feels a bit more abstract. Choruses are incredibly melodic and anthemic and the song overall feels a bit more “romantic” in a sense. “Headless” also holds that sense of the anthemic, though it takes a “heavy lightness” approach and draws melody out to expand on atmosphere. It’s not necessarily doing anything amazing, but it plays itself out well enough due to its approach. Perhaps it would stand out better if most of both it and the album didn’t sound so flat.

Generally Deftones get past this issue as a lot of their effectiveness as a band comes from their sounding unified, their use of subtlety and emotion, as well as their ability to “experiment” whilst keeping the music from meandering. They’re one of the few bands able to blend heaviness and dreaminess to great effect whilst having their own sound. In turn their music reaches out and connects with people, and justifiably so. However, too often Ohms sounds lifeless to the point where it can become really tiring to hear. Some songs get past this, but not to the same extent as prior releases. They’re begging for more range so they can breathe and make an impact;, but rather than have that range they get a flatness that really fucks with the album.

One of the few tracks to get past the lack of range is the closing one, “Ohms”. Of all of Ohms‘ songs, this is perhaps the one that reveals itself the most over subsequent plays of the whole album. The quick descending guitar work creates this sort of oddly-chaotic feel that the rest of the Deftones have no issue in bolstering. Suddenly the song gives way to something more mid-paced, rhythmic, floating and determined. Chino allows his specifically vague words to really sink in as he delivers them with in this sort of “flowing” manner. The choruses add a bit more of a sense of realisation, but there’s still a sense of comfort and perhaps moving on; everyone rises up for each line, but only for a brief moment, preventing the song from lingering too much on itself.

After the second chorus the song rises up a few more times before returning to the opening riff which, in closing off the song, feels both climactic and cathartic. Deftones don’t sound constrained here; the lack of range still sucks, but they just push right past it with ease to create something quite moving. “Ohms” sounds melancholic and bitter, but also comforting. It sounds like a song expressing a sense of acknowledging a kind of darkness whilst choosing to not drown in it. It’s a solid closer, as well as a solid song.

When Ohms came out, I talked about it with a good friend of mine, Tyler (also known as b l u e s c r e e n). As I’ve known Tyler for a while and as he was the one who introduced me to Deftones, I want to share a slightly truncated version of what he said about the album:

“I dig it. A lot. I’d say its more like their stuff / sound during Saturday Night Wrist/ Deftones. Bit more electronic experimentation and heavy riffs. Less melodic metal like that of Gore and Koi No Yokan. At times I’m not sure it knows what kind of album it wants to be but every re-listen helps solidify its uniqueness. I’d say the overall sound is more favourable to me than what Gore gave, but the specific tracks don’t hit as much as previous ones from Gore or Koi No Yokan. All in all I still really like it though, and am grateful for music by my fav band.”

I feel that what Tyler said makes a lot of sense. There was something else about Terry Date and how he captures percussion, but what I want to focus on here is the sound and how the tracks hit.

Compared to Gore, and perhaps the rest of Deftones’ discography, Ohms feels quite streamlined. The band still “experiments” a bit, but it sounds more like the band narrowing itself. The album is more instantly familiar with itself for it, but there’s little room for stuff that, whilst perhaps odd at first, makes more sense the more you listen to it. That’s fine and Deftones deliver the “go right ahead, no divergences” stuff quite well. However, here they sound more like they are comfortable more than confident in pushing outward. Whilst Ohms still works well – it sounds cohesive and flows well enough – it feels a little too fine with playing it safe.

I feel like saying that undermines Deftones’ efforts here as they still deliver. It’s great that the synth is more prominent in the mix. It’s also great that, to a slight extent, they de-emphasised guitar without diminishing its importance. Whilst the lack of range in the songs makes too much of it feel homogeneous and not really stand out, there is some really strong work on Ohms. It’s Deftones making tasteful music; something they’ve always done and something they’ll continue to do.