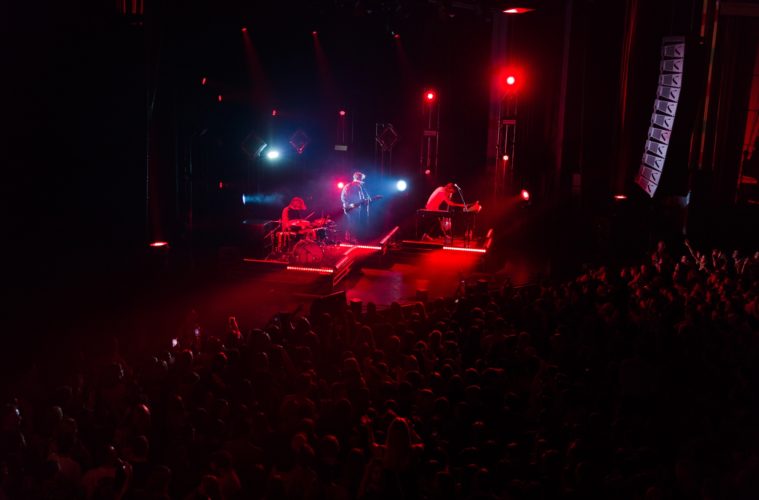 It was a night-like night. Specifically one of the ones that falls on a Friday. People were out and people were in. Some of those that were in ended up out, and some that were out ended up in. Of those people that ended up in, a number went to venues to partake in a live music experience featuring artists, bands, or both, such as Crooked Colours who were playing live at The Enmore.

Opening the night to a small crowd was KAYEX. Their set was fairly straightforward electronica and pop, which worked well in a live setting; “Warrior Games” in particular was a highlight. It sounded fuller and worked better. Bot it and the other songs came and went with ease to an appreciative audience.

At one point KAYEX played “Feel Good Inc”. As in (aside from Maseo’s laughs) they removed the vocal lines and sung over it. It would’ve been better if KAYEX had gone for their own interpretation, even if that was a faithful version. As they didn’t it was a poor choice.

The bigger issue is that at times  KAYEX not to be playing their bass and guitar, and the only thing live were the vocals. Seeing hands come off an instrument and hearing no change in a song was distracting to say the least.

Those said, KAYEX did a good job of warming up the audience.

Nyxen came on soon after and launched into an energetic set. Song after song seemed to pour out with ease, and she handled various small parts of each song pretty well. It was music meant to make you move which is  where it succeeded most.

Strong rhythms pushed out from the stage into the far reaches of The Enmore. Many of those in the path would either dance or sway as music’s power moved around them.

The set had many peaks and few valleys, but that worked in Nyxen’s favour. She got in and out whilst being both engaging and entertaining.

It was another short wait before Crooked Colours began playing.
Their introduction was a more moody affair than the prior two acts, but this didn’t detract from the set.

A kind of slow buildup began as Crooked Colours walked onto stage. Low blue lighting kept things dark enough to keep some sort of anticipation going, but not so much that details became ambiguous. It helped to build up Crooked Colours that little bit more and lead into the meat of their set.

Speaking of which, their set was pretty straightforward. Tightly-crafted pop songs permeated each moment Crooked Colours were on stage. Plenty of lyrics suggesting forms of romance, tight drumming and synths aplenty came from their playing.

Good use of lights cast from the stage and across the audience matched the songs nicely. Occasionally the lights were beams that would vivisect each other. Sometimes they’d move around rapidly. There was a nice variation that never veered into full on. Crooked Colours were not pushing for intensity. Thus the visual display was tasteful.

On a few, very brief occasions basic pyrotechnics met the light display to great effect. When used they punctuated a percussive line and only lasted a few seconds. It was better that the pyrotechnics saw brief use. Crooked Colours know how to feed their audience; anything more than sparse would’ve been excessive.

Whilst covering “Suga Suga” was a misstep (it didn’t fit with the rest of Crooked Colours’ set), the songs moved through each other nicely. There were no special tricks to any of the songs; no novelties to grab people. Just a tight run-through of a number of their songs. Even Ladyhawke appearing to perform her vocals from “Never Dance Alone” felt like a natural part of the set rather than just a guest appearance.

Nearing the end of their set, Crooked Colours temporarily left the stage. Some people started leaving, but most knew that the band would very shortly be back on stage to play a few more songs.

Just before their last song, Crooked Colours thanked their management for getting them a gig at The Enmore, then closed the set with “Perfect Run”. Crooked Colours performed for the fans in a way you don’t always get to see. It wasn’t necessary intimate, but both the band and the audience were clearly appreciative of each other.

That is to say that Crooked Colours put on a worthwhile performance.