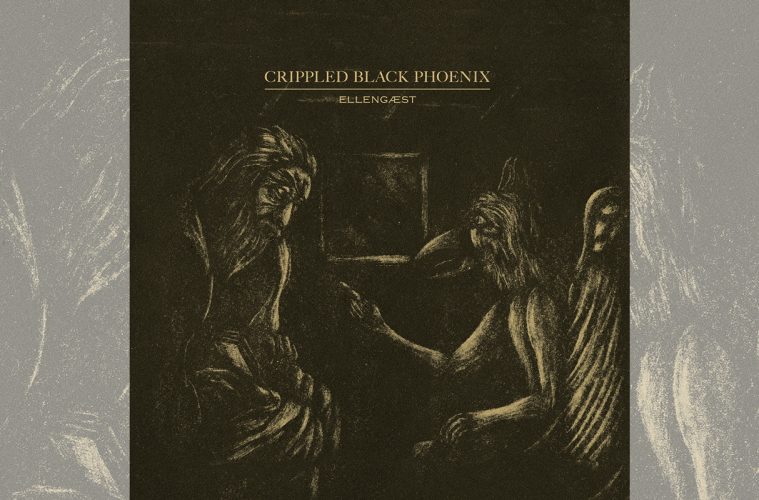 Lonely, sad trumpet kicks off Crippled Black Phoenix’s Ellengæst, then suddenly! A violent barrage; almost a cacophony, then something slower, rolling and brooding. Things regarding fateful tales about losing control. Almost a procession of sorts, though maybe it’s more of a passionate, fatalistic dance.

Eventually there’s a stop of sorts and “House Of Fools” shifts into something quieter, yet no less dramatic. Samples come in and paint a scene, a massive climax that feels more hopeful than the rest of the song. It’s a sharp contrast, though still fitting.

It’s a highly dramatic way to open Ellengæst, but considering the rest of the album it makes for a rather definitive statement of intent. More drama, “mood”, samples carefully chosen and placed, grandiosity, a lot of reverb, and a good number of interesting passages follow.

“Lost” continues the album with a bit more punch and drive behind it whilst sticking to a less variable flow. Through the lyrics delivered in various vocal shifts a sense of impending grimness comes forward; the music underneath retains a sense of opposition toward said grimness. “In The Night” begins with a dry, matter-of-fact recounting of past behaviour before slipping into a noirish, dusty and slow song. It’s low-key for a while, though eventually it becomes bigger in sound whilst revealing itself as an uplifting piece.

On an album full of moving songs, “Cry Of Love” might just be the most. Its driving beat anchors the instrumentation and helps the “quiet” / loud thrust of the song flow without a hitch; the vocals, whilst almost too much, build on the mood and atmosphere well enough. They also help enforce the song feeling like a throwback to a previous era of music. “Cry Of Love” is a passionate and emotionally charged song about cats; it feels both mournful and celebratory, as well as honest and pure.

“Everything I Say” returns to something more noirish and brooding, but it’s also a bit meaner in sound than Ellengæst‘s other songs. It knows when to cut loose but it still feels controlled. “(-)” functions as both an interlude and its own thing. Whilst it’s easy to let it blend into itself, when listening to its words, the emotional weight of the piece becomes quite apparent.

“The Invisible Past” starts slow and quiet and remains as such for a good chunk of its run. Just at the right time it brings in its first climax and only lets up a little after before building up again near the end. It’s beautiful, affecting, all that stuff.

Ellengæst closes with a cover of “She’s In Parties”, which is fine enough, but it feels like filler. “The Invisible Past” closes the album really well; It’s fitting in its climactic sound and wraps the whole thing up neatly. “She’s In Parties” sounds like the other tracks; It feels like it belongs elsewhere. Maybe Crippled Black Phoenix felt the album needed to end on something less emotionally heavy. If so, then fair call, but the song still ends up feeling like a screwed opportunity.

In places Ellengæst provides richly beautiful music, strong in expression and quite moving. However, whilst the songs often feel earned in terms of their emotional content, the whole thing is so overtly, relentlessly dramatic that at times it becomes saccharine and feels very surface. Not helping this is how heavy the reverb is for the songs, which seems to be for helping to impose a dark and brooding atmosphere.  It works well for “Cry Of Love”, “The Invisible Past” and “She’s In Parties”; the others feel more like a band playing in a big echoing room. It creates too much distance and flattens things out.

Stripping back a bit of the reverb and holding back a bit on the grandiosity would’ve helped a lot. Crippled Black Phoenix are a dramatic band, but on Ellengæst they go for excess a little too much. That said, these are worthwhile songs. To an extent they are engaging, and feel much like a worthwhile journey. They just needed more restraint.