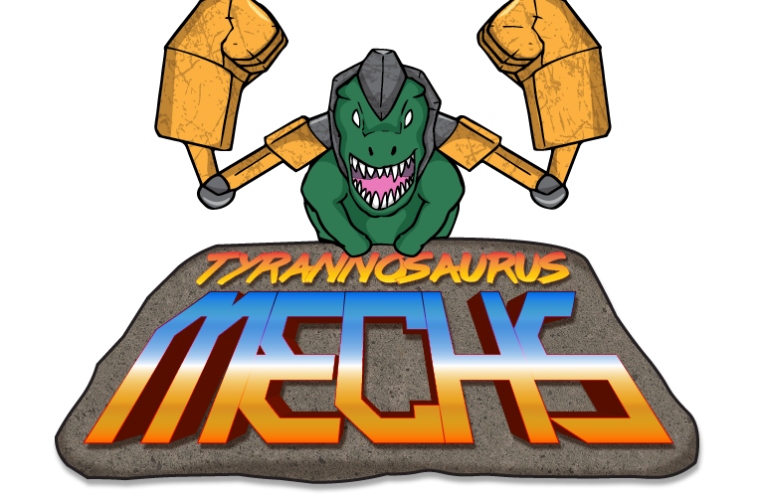 A Conversation with Fabian about Tyrannosaurus Mechs: Part Two

Part 1 of the interview is here.

Brenden: What was one of the bigger challenges that you faced with creating T-Mechs?

Fabian: From my point? Because I was mainly in production, the biggest challenge at the beginning was getting everyone to see the game as I saw it.

I could describe a circle to you. I could basically say “Hey, this is a circle”, but unless I show you a picture of it, you have no idea what colour the circle it is, what size it is. Is it an abstract circle? Is it a sphere? Does it have shading? You don’t know that, so I have to go and describe all of that to you.

If I say “dinosaur beat ’em up”, what’s the first thing that you think of?

Fabian: That’s the thing. One of the big things of game design is a lot of people know how to play video games and what to do because of what’s known as conventions. The reason why you know X is to jump is because everybody fucking uses X to jump. Now that we have the typical twin stick left stick to move, right stick to rotate camera, everyone uses it because it’s gaming convention and its a thing about game literacy as well.

So for me trying to say to my class “Hey, this is my vision for a dinosaur beat em up”, I had to be very specific. It took me weeks to get everybody on the page. Once they realised what we were going for, the wheels started turning. Things started moving. The Pyramids started getting built. They were dragging stones.

The next big challenge for production: I’m not a paperwork guy. I can be organised, but I hate paperwork. So having to organise nine different people…

Normally in our school, they only have teams of maybe two to three per game. There were nine of us in class so they would have had one of five and one of four. Everyone pretty much voted unanimously for T-Mechs. One of the students – Chris – had a cute little idea for a bomb-diffusing robot, and what would happen is that you would control it from a control room. There were nine monitors and they had different camera angles so its coming up this way on this one, but on that one its going that way and that’s how you diffuse the bomb and that’s cool ’cause you’ve got to avoid terrorists and whatnot. His idea came in second, but when it came down to it, Chris said “I want to work on T-Mechs.”

As soon as the main director said that everyone just went “Yeah alright we’re doing that one.“

I’ve never managed that many people in my life. Nine people, keeping them all on task, keeping them motivated, finding work, and having to plan six months of work for nine people… that got frustrating, and I had to ’cause after my pitch was accepted, my lecturer said “Okay cool. Flesh it out for us. Come back next week with another presentation.”

So after that pitch was done the lecturer said “Now, road map the whole thing”. I know we work in a pipeline so there’s always going to be concept art into actual turnarounds into modelling into rigging into animation into implementation, programming, underscoring the whole thing. That’s the pipeline, so I know how it’s all going to work, but then I’m thought “While I have my concept artist doing this, what am I gonna have my rigger doing?”

So I’ve got people from different parts and I’ve got to give them work.

The first three months was all pre-production and getting a very basic prototype.

Then once we came back for our next try which was all full on production I had all the steps, all the ducks in a row, and even then I didn’t prepare for everything. Something fucks up along the line. Something breaks. And you go “shit”. The biggest problem with production? Putting out fires everywhere. You’re always putting out fires. That’s the big thing.

Back to the audio.

So I had maybe four to five weeks at the very end. Cool. I had someone who was there. Unfortunately it didn’t really work out, but then I struck gold because The Game Developers Conference released this big pack of sound effects.

I kid you not; because I delayed so much on the audio, in the last two weeks I spent more than twenty hours listening to different sound effects, sorting, picking them and I did not even get the audio implemented until the second-last day, so we didn’t get the chance to mix, master or test it. Some of the stuff sounds terrible.

Brenden: It sounds a little janky.

Fabian: So my main thing was having the sound effects work, but then when we played one sound effect in conjunction with another it clashed so bad. It’s like a really bad Jackson Pollock.

It didn’t mesh, and I didn’t realise how much of an art form it is, so I’m never underestimating audio again.

I need to get someone who not only is a professional, but is involved in the project form the start. We had to outsource and even though there was some communication it wasn’t enough and I don’t think they saw the vision as we did. The first thing they gave us was dubstep and that kind of went against…

Brenden: I wouldn’t expect it to be dubstep. It’s more metal.

Fabian: I was trying to find backing music and someone linked me to one of the new songs from Cyberpunk 2077  called “Chippin in” and I thought “That’s got a mad Rage Against the Machine vibe.”

Started listening to that, thought that’s that kind of music I want. Then I heard Judas Priest for the first time. When I started listening I thought “This is it. This is the sound.” I even went and I bought The Essential Judas Priest so my entire last two weeks of class when I was doing essays and assessments I was listening to that on loop. I am a mad fan of “Diamonds and Rust” now. One of my favourite songs from them. Just beautiful.

Brenden: I don’t think we have much time left, so I’ll close it out by asking:

Now that everything is complete with studies, what are you now going to do with the project?

Fabian: I want Tyrannosaurus Mechs to get out there. At first it thought “This is a good major project”, but the reception has been so much more than I expected. When I first debuted it, everyone loved the feeling.

I didn’t think we’d get into the indie showcase because I thought we were going to be up against professionals. We made it into the top twelve and I’m like “Holy shit, really? How?” You saw some of the other games there. Some of them are like full-on Steam releases and I’m like “is our one that good?” and we made it.

Every friend that we’ve showed it to, everyone outside of our friend groups goes “This is fun.”

Brenden: I had a great time with it.

Fabian: And I reckon that’s the thing. That reaction, that response is what’s fueling me right now. At first I’m like “It’s good, it’s fun, thank you.” But when JMC had an open day not too long ago? Students in their teens, they were like “Oh, I wanna do game design.” I sat there and I showed them my game. They loved it. When I walked out I spoke to one of the business entertainment students and they said “Do you have a social media? We want to support you.” I hadn’t planned it.

My expectations for the game were low and they had skyrocketed it at that point.

They wanted a social media. They wanted something to follow. It blew my mind and because of that, I want to make this so people will play it and enjoy it. And so far, I think I’m doing a good job, and that’s why I’m rounding up as many people as I can right now and saying “Hey, do you want to work on T-Mechs? Let’s make this a reality. Let’s make this a thing.”

Brenden: So is that the working title?

Fabian: We don’t even have a studio name. It’s just a bunch of people. I’d call it Team Mechs if I wanted to. I haven’t run it by anyone else. The game is definitely called Tyrannosaurus Mechs.

Hopefully over the next three months we’ll be working on art and getting onto a solid design document and by the beginning of next year we wanna start production. We wanna be putting out some weekly updates.

Brenden: Well thanks very much for that Fabian. It was a pleasure talking with you. I can’t wait to see where Tyrannosaurus Mechs goes.

Fabian: Awesome. Thanks a lot man.