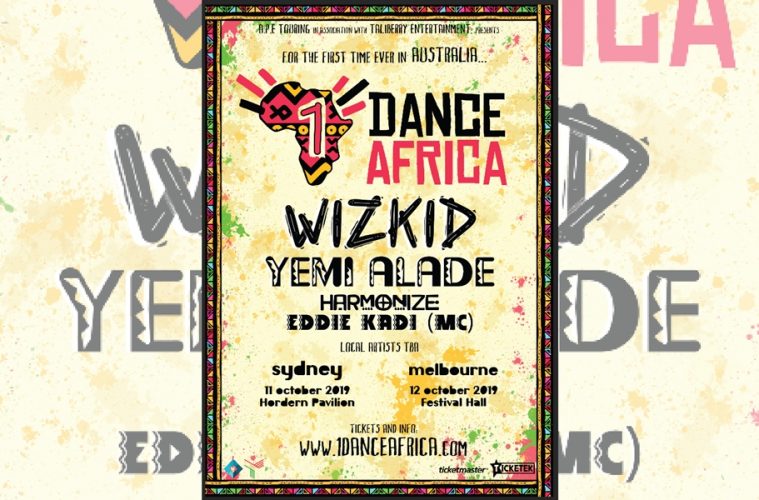 A Conversation with Gerang of Taliberry Entertainment About 1Dance Africa

In conjunction with A.P.E, they’re Talibery Entertainment are running 1Dance Africa, a concert series being held in Sydney and Melbourne this October that showcases African culture.

Toward the end of August I had the opportunity to talk to Gerang of Taliberry Entertainment and ask him about the concert series.

Ez: How’re you going this afternoon?

Gerang: Not too bad man. Just finished off work a little bit early.

Ez: That’s always a good thing, when you get to home early.

I guess I’ll start by asking: Tell us a bit about 1Dance. What inspired it coming to Australia?

Gerang: What inspired for this show to happen in Australia…

I myself, I’ve looked into festivals and concerts such as international and global festivals overseas, and the fact that all the African-Australians that are here and other communities here that are into Afrobeat… we didn’t really have a festival that could showcase Afrobeat. That was one thing that I was really, really keen on; to bring something forth for the Australian media and Australian crowd [so they can] experience the live performance from Afrobeat Artists.

That’s the vision behind 1Dance: To bring something forward and to give more information in Australia about the music that comes out of Africa, and even more about the African culture as well, so it’s important that this thing happens.

It will inform so many people here of the music that comes out of Africa, so that’s the positive side of it.

Ez: Is this something that’s been in planning for a while?

Gerang: I’ve looked into it for about a year and a half now. There’s a few shows that happen in Australia where one single artist will come out, but I really wanted to establish something that is quite different and give more than one artist to the crowd that’s out here.

We’re starting off as a concert series right now, but looking to grow into a musical festival in the future. I’m really keen on seeing it grow.

Ez: Hopefully it is well-received as that would be a great thing.

Did it take a lot of work to get off the ground, or was it something that came really easily?

Gerang: For myself, and my team – Taliberry Entertainment – it took quite some time finding the right cooperation. We went around, knocked on a few doors, but with so many people not really being familiar with Afrobeat and African culture, a lot of them weren’t keen on jumping on board and making this happen for us.

It took about – I would say – a year of just going around, trying to find the right people. One day we were very fortunate to come across A.P.E – Apples and Pears Entertainment – and everything just happened to fall in place.

They were really keen on learning about African culture and all the music that comes out of Africa, so once both teams got on the same page, it started building up around seven, eight months ago, which ended up forming 1Dance Africa. That’s what it is today.

Ez: That’s also pretty good. Did the time it took to find people who were willing to provide support put more pressure on to organise the whole thing?

Gerang: When we first started looking into this, we thought we could possibly put it together as Taliberry Entertainment ourselves. Once you start learning of what it takes to put something this major together, you start to think to yourself that it would need professionals, and we didn’t really have any experience in putting something like that together, so it got us thinking about bringing a professional team into this.

There are so many levels that you need to tick until you get to the final stage, including booking artists, venues and all these other important things to make the show happen. It was something we could not tackle ourselves.

A.P.E is a very good team to have come on board and make it happen.

Ez: How influenced by Afrobeats are the artists that you’ve chosen? When people come to see this concert series, are they going to get a full experience of it, or is it heavily influenced but more of an appetsier, so to speak?

Gerang: Well, one artist which is WizKid… My opinion is that he’s the best in Afrobeat right now. He’s collaborating with artists such as Skepta, Drake. He was just on the (recent) Lion King album. He sang a song with Beyonce Knowles: “Brown Skin Girl”.

When we first looked into this and we wanted to bring something very large into the Australian music industry wanted someone that would catch everyone’s attention. Someone that, if we added his or her name into the lineup, then everyone would jump on board straight away. WizKid was the best person for that.

Last week on Spotify, he was the first African artist to get one million listeners, so that shows that he’s growing and he’s becoming recognised as an artist.

The decision to bring him on board was very strong. We believe that he’s the perfect person to help establish the show down here and give the right exposure to the Australian industry. I believe so many promoters in the past have [to bring him here] but weren’t really successful.

With the other two that are on board – Harmonize and Yemi Alade – They both represent each side of Africa. Harmonize is possibly the biggest artist in East Africa at the moment.

With all these three artists, they add a bit of different elements to the festival. Where Wizkid is more Afrobeats, Yemi Alade is an Afrobeat artist, but also Afropop. Someone like Harmonize, he does Afrobeat as well, but he [also does] Bongo. It’s the most famous genre in East Africa. So each of these artists have a piece to add into this.

We wanted to be very selective with each artist that came on board because there’s a message behind why we selected each artist.

It took a bit of time to pick the perfect artists, but the Wizkid decision was just an instant decision.

Ez: You said that people have had trouble getting him out here before. Was it a really straightforward process getting him on board, or did it take a bit of time?

Gerang: Well, from the A.P.E side of speaking with his manager, as soon as we gave them information about what’s behind the approach – which was establishing something very large for the African community here – that’s something that Wizkid and his team were keen on being a part of.

It wasn’t just “come down here for a tour where you’re just going to go around.”

I guess it was a difference in approach. I don’t know what past promoter’s approaches were, but it happened that our one really made sense with Wizkid and his team. Getting him on board was something that we thought would be challenging, but once we started going back and forth, it became quite clear that they were as keen as us.

Ez: Now in regards to 1Dance Africa, outside of the musical experience, what can people expect?

Gerang: Well we’re also going to have food vendors, so there will be a lot of food. There will be drummers there. Twenty [drumming] classes that will be happening on the day.

For someone who is not really familiar with the African musical or cultural pieces, once they come it will teach them so much about the positive side of Africa, which I feel so many people in Australia don’t really get to see and learn [about]. Even the fashion and African dances as well, which is something that we’re going to add onto the show as well.

There’s a lot that the show will deliver to anyone who comes. There will be a lot of information throughout the night. Surrounding yourself with African people, where if there’s anything someone will want to know; that’s the perfect environment to be informed.

Ez: Well, just to wrap it up, what does Afrobeat and dancehall mean to you?

Gerang: To me it’s just… when I listen to it, it puts me in a positive mood. It ticks a lot of boxes for me. Growing up and listening to Afrobeat from my father’s time; it’s something I became really familiar with. The other thing I like about Afrobeat and dancehall is that it teaches and speaks more about my culture and it’s more about people that look like me.

I grew up listening to it around my cousins, around my brother and my mates. We became really familiar with it. The more it grew, the more Afrobeat artists started collaborating with big artists like Drake, and now Beyonce and even Alicia Keys.

It got me very keen on there being more to come out of Africa.

Afrobeat is now known around the world and starting to be known more in Australia. It’s good because it represents where I come from, so it’s something that I hope grows in the years to come. The bigger it gets, the more people become aware of the African culture, the African fashion, the African dancing and other positive things that come out of Afrobeat.

Music is a universal language, so if the music can travel, people can learn so much from Afrobeat and dancehall.

Ez: Fair enough. It’s sound like it’s gonna work out pretty well. I hope a lot of people will be able to get down there and experience it.

Other than that, thank you very much for your time. It’s been a pleasure, and looking forward to see what comes of it. Hope you have a good one.

Gerang: You too mate.