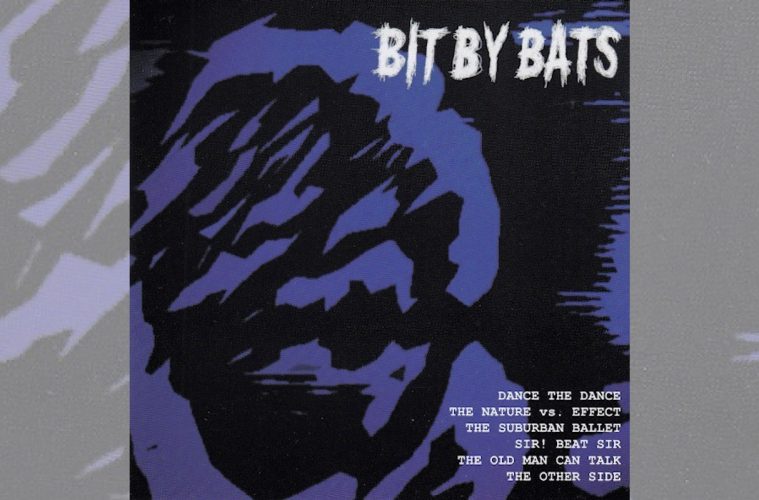 Whilst I heard both songs on FBi, I can’t remember if I first heard “Dance the Dance” or “Sir! Beat Sir”. I know “Sir! Beat Sir” was the one that stuck with me; thus it was the song that led to me purchasing Bit by Bats.

This is another EP that I listened to… maybe twice before putting down. A few years ago when I was making a lazy attempt to listen to all the music I had at the time I listened to the EP again. That was enough for me.

Last year after finishing off writing about Lovers le Strange I didn’t wait too long before I started listening to and writing about Bit by Bats but it was put to the side for other things. Uni, “life”, other reviews; Thing like those got in the way.

Eventually I made the time to finish this off as I wanted to move onto other releases. Admittedly I found myself enjoying the EP a bit more this time around.

The EP starts with a low, distant sound and some moody, ringing guitar. percussion comes in, then “Dance the Dance” switches gears to something less overtly moody and more… dancy, for lack of a better word. Words come out “sung” in a semi-clear manner; they feel as though they’re coming from someone stressed and rushed.

The other songs go through a few different styles, though often with a sense of tension underscoring them. “The Nature Vs. Effect” goes for a bass-heavy, jagged guitar sound; “The Suburban Ballet” takes on a more melodic, riff-based approach. “The Old Man Can Talk” is akin to a simple pop ballad, and the dry-sounding “The Other Side” closes the EP off with rolling drums, increasingly frantic theremin and more jagged guitar… or it would if not for the aggressive, biting hidden track that follows shortly after.

Fourth song “Sir! Beat Sir” is the song that has stuck with me the most. It has a kind of energy; an attack that seems to just strike out in ways that the rest of the EP doesn’t. The shuffling beat works well with the driving bass and ringing guitars, and the vocals – whilst as shouted and frazzled and tense as a few of the other songs – are more focused and punchy. It is here on the EP where the band sound fully-realised and at their most effective.

As far as first releases go, Bit by Bats is decent. The band sound confident with their material which is deceptively-loose sounding. There’s a rawness to the songs that comes through quite well, and despite a couple of moments where they drag, the songs run for just long enough to not deflate. The band perform with a good deal of energy which helps to create a strong sense of mood, but as a recording a bit too much of it feels flat.

This EP sounds like it was aiming to capture a live feel and in some ways it gives the idea of a live performance, but it’s strongly lacking in the overall punch the songs feel like they’d have in a live setting. They are punchy, sure, but not punchy enough.

I know that seems like grasping at straws, but I find it difficult to not think about how this EP would sound in a live setting. I feel that it would really hit and probably get people dancing as these songs really need a sense of presence to work. In studio form Bit by Bats is an interesting collection of songs from a fairly young band that captures certain feelings well, but I don’t know if there’s more about it I can say.

I’m not sure if I can recommend Bit by Bats. Initially this review was going to be quite negative. However, in my procrastination I’ve come to appreciate Bit by Bats a bit more; at least enough to want to hear what the band did on their album.

That said, it did take a long time to get to a point where I found it appreciable.

Shortly after starting this “series” I had the idea of picking three defunct bands from the Sydney guitar pop scene from around 2000 to 2010 and trying to ruminate on what led to their popularity or lack thereof. Turns out Bit by Bats were from Adelaide, then Melbourne so that idea went out the window; at least for now.

I could go with Youth Group but they still exist.