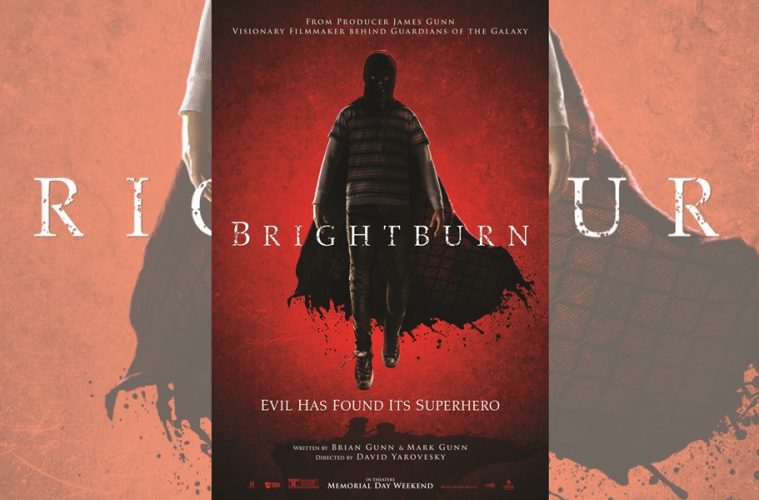 James Gunn is back at it again with another Superhero film; This time it’s a little different.
Brightburn follows the story of Brandon Breyer (Jackson A. Dunn), a timid country kid from Brightburn, Kansas.

His story is simple. You’ve probably heard it before. An alien spaceship crash lands in a farm’s backyard.
The farm’s residents – a young couple – find a baby within the spaceship, so they adopt him and love him as their own.

That’s right! Brightburn is basically a Superman origin story; just with a horror twist.
From their upbringing to their names and powers; Brandon is basically Clark Kent.

Brightburn brings about an interesting question: what would happen if Superman went wrong?
Whilst the Superman comics (among others) have explored this several times, films seldom do.

Elizabeth Banks and David Denman did a great job in playing Tori and Kyle Breyer, Brandon’s
adoptive parents. Not only was the acting realistic; it played a huge part in the film’s themes and
correlation to Superman.

Director David Yarovesky’s touch helped implement horror motifs within the
movie. For example, an early scene features a game of hide-and-seek.
Brandon is hiding in the “forbidden place” and sure enough, within the first fifteen minutes a jump scare happens, clearly setting the tone for the film’s remainder.

However, the story did possess some issues.
Oftentimes Brandon seems to hold no agency; he often acts in a reactionary manner rather than thinking things through. This led to his motives coming off as muddy. Several times he says he wants to be good, but he never seems to try.

Brandon shows no signs of his actions troubling him; Nor does he question them. If he was trying to do good, you would expect at the very least some signs of remorse.

Brightburn‘s explanation for why Brandon does what he does is the spaceship that brought him to earth. It felt like a cheat due to it lazily enforcing Brandon’s lack of agency. The film paints Brandon as a character we should be invested in, but instead he’s like a mindless drone.

Whilst recontextualising the origin story from a villanous perspective is a good idea, the film instead could have focused on Brandon and his fall from grace. He could’ve become a Superman-like symbol and been forced to make tough, morally dark choices. The horror elements would still fit well whilst allowing for better character development.

Brightburn had a great foundational idea and the right genres backing it. With further reviews of
the script, I have no doubt the film could have been a masterpiece of the superhero genre.
However, considering that this movie was low budget compared to many of its kin, it has done well. It isn’t horribly written and it still makes sense.

Brightburn is an interesting concept; one worth furthering.
Definitely watch this movie when it goes to DVD.