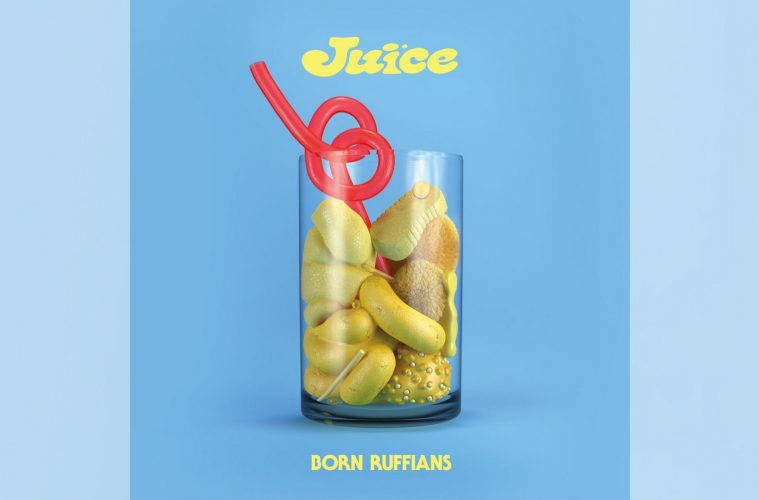 Born Ruffians have been around for a while and so on and so forth. Anyway, last year they put out JUICE, the first in a trilogy of albums that are about… something. Probably a few things. Anyway, this word wasting is on the first album of this trilogy; the aforementioned JUICE.

So the album starts dominated by horns which provide a textured feel. The vocals come in over a spaced beat; soon Born Ruffians launch into the song proper with speed. It’s fun and all, even when the song switches gears, but it’s in that switch that lets the band down.

JUICE is an album that co-opts sounds from the seventies and sometimes that co-opting works. However, when it doesn’t Born Ruffians sound more like a tribute act than a group taking and reworking said sounds. “I Fall in Love Every Night” probably needed a transition somewhere; at least, at it’s existing length which leaves the song feeling like it drags. It’s difficult to say what kind of transition would work in either transitioning or supplanting the energy the song builds. It’s also difficult to say that digging up the past was the best choice.

This said, JUICE is a fun album in many places. “Breathe” is an easy, joyous-sounding bop, as is “Dedication”, though with a bit more happy shouting. “The Poet [Can’t Jam]” goes for something relatively slower and airier whilst keeping an upbeat sound at the forefront. “I’m Fine” continues with that sense of relative slowness with a bit more of a stomp in the beat and a relaxed quirkiness, so to speak.

Often there seems to be an underlying seriousness in quite a few of the songs and the delivery often very loosely masks said seriousness. It’s easy enough to get caught up in the album’s sound and not pay attention; it’s equally easy to hear what’s happening with the lyrics. Perhaps the delivery isn’t meant to mask so much as it’s meant to take an edge off. If so, sometimes it works, but it also has a habit of coming off as hokey and detracting.

This said, things come together on “Hey You”. It’s relaxed, gentle with the vocal delivery, and overall flows quite nicely. It’s a sweet song aided well by Maddy Wilde’s vocals; It rises in all the right places and feels intimate and connecting in a way the other songs don’t.

The closing two tracks, “Hazy Wave” and “Wavy Haze” are pleasant enough. “Hazy Wave” is a short ambient piece that kind of calmly washes over. It also does well to ease things into “Wavy Haze” which also has a sense of calm to it, though with a bit more thrust behind it than “Hazy Wave”. At first the song feels like Born Ruffians are taking it easy; like they’re looking to just keep everything relaxed. There’s a point where it seems like the song will explode into something climactic, but instead of doing so Born Ruffians hold back and diffuse any possibility of the song becoming some big thing. Whilst feeling highly calculated, it still is an appreciable moment of restraint.

JUICE is in a bit of an odd position. It’s an album that sounds fun, though it does have a seriousness to it that works in places. The instruments sound lively when necessary, the songs are tight and the vocal performance is acceptable. Some of the material here is strong and some of it isn’t. As a band Born Ruffians sound like they’ve got their stuff together; they know their way around a song and how to get the most out of one, but the past-leaning moments kind of bog things down a bit.