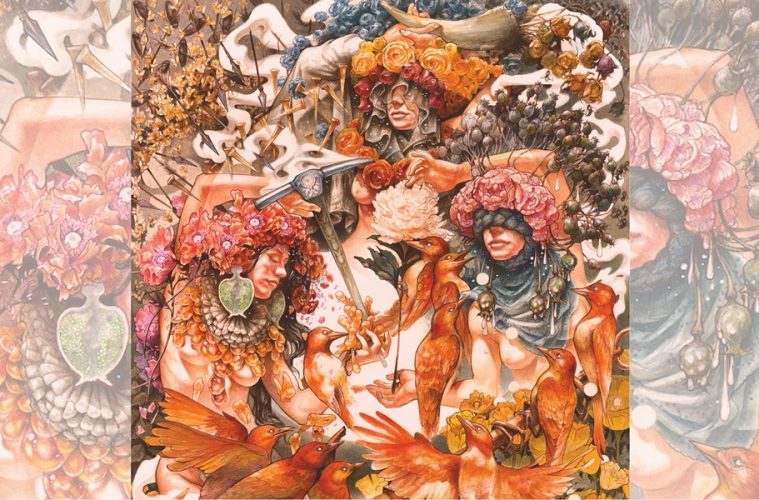 I remember when I heard Baroness for the first time.
Since then, they’ve put out a few albums; the most recent being Gold & Grey. Whilst clearly a Baroness album, the band experiment a bit more here than on prior releases. Does the album glitter, or will it blend in with the rest?

The answer is maybe.

Gold & Grey sees Baroness transitioning more into a song band over a music band; that is to say that whilst the album has thematic and musical threads it sounds like the focus was on each song as an individual rather than a whole. Combined with a few other factors, it becomes difficult to justify the album’s length.

This becomes exacerbated by the album announcing its end somewhere between “I’d do Anything” and “Broken Halo”, then picking up again. It winds down, then depending on how generous you are it either suddenly resumes or has a few closing tracks in quick succession before suddenly resuming. The instrumentals break up the album the most after “I’d do Anything”, with four of the six coming after that song.

Admittedly more than half the album remains at that point. However, when a bunch of tracks that sound like their purpose is to help pace an album frequently appear, it suggests that the album might have issues with its pacing.

Whilst I feel like I’m flogging a dead horse by bringing this up, I also feel that it needs to be mentioned: Gold & Grey‘s compression and loudness is detrimental to the songs it presents. Instead of letting the dynamics come through, someone decided that the best thing for most of the songs was for them to be at maximum as much as possible. It makes the album aggressively confrontational for no discernible benefit.

I imagine that the album’s sound was an artistic choice. If only for a few songs, it probably would’ve worked. Over a one hour period, not so much.

If Baroness were looking for a lo-fi sound, then why didn’t they just record and play with a lo-fi setup? Why didn’t they just be a noisy band instead of making it sound as though they were? Why not make those louder, more crushed parts a result of their playing rather than something after the fact? That way when parts become somewhat indecipherable, at least there would be something more appropriate behind it.

Not every song needs breathing space, but it’s a problem here as often the songs sound like they once had dynamics. There are times when things become so muddy that the biggest challenge becomes working out what is happening. There’s emotion signified in the performance, but often the songs sound sterile to the point where John Dyer Baizley’s voice breaking during one of the choruses of “artificial heart” serves more as a reminder of emotion than it does an emotive part of an emotive song.

I’ve taken too long to state this issue, so the best way I can summarise it is as thus: A new knife should not be dull.

With all of that out of the way, some of the tracks really stand out.

“Pale Sun” is a spacey, dry-ish and atmospheric song. It flows nicely from “Assault on East Falls” and expands without compromising itself. The songs sounds more like an exploration of sound than it does a song for its own world. For that it makes for a great closer.

“Cold-Blooded Angels” gradually builds until the band decide its time to rock out. The sounds steadily weave around each other before the song explodes and Baroness drive it as passionately and emotively as they can for the remainder. It’s one of the few times that, despite smothering, the emotive content comes through.

There are other standout tracks such as “Borderlines” and “Seasons”, but then there is “I’d do Anything”; a song that handles its subject matter well, but sounds like a melodramatic stock-standard ballad. It’s mostly on its own, however, as most of the songs are less by the numbers and better developed.

The band performance aspect, however, is always on point. In each of the fuller songs, what is audible sounds like a group of people gelling well with each other. This is a band that pulls punches and hammers down when necessary without phoning it in.

Despite being the most recent member, Gina Gleason feels like a natural fit. She doesn’t sound out of place guitar-wise and brings a lot of strength to the vocal harmonies which helps to reduce the impact of John Dyer Baizley’s limited range.

In the past Baroness held a balance between serious and fun. At the moment they sound interested in being more weighty with their subject matter. That’s fine. The issue is that, whilst the serious leaning is acceptable, after sixty minutes of mostly overly loud songs with nigh unintelligible-sounding moments, acceptable isn’t good enough. It’s tiring.

It’s difficult to call Gold & Grey bad. Some of Baroness’ best material is on this album. It highlights their growth as a band as well as their willingness to explore. At the same time it’s a difficult album to recommend.

Gold & Grey feels like it was meant to be a double album. Maybe the band couldn’t pen enough songs for one and decided to go with what they had. If so, fair enough. Individually a lot of the songs work, but as a whole too many become forgettable and bog the album down. In conjunction with other issues, the album dragging more the longer it runs.

Of course I don’t know if the initial plans were for a double album. I wasn’t there and I doubt John Dyer Baizley would want to sit down for an interview with someone who just spent a number of paragraphs criticizing art he was part of.

At the very least Gold & Grey is worth checking out once. That should tell you enough about whether you’ll want to dig into it or leave it by the wayside.