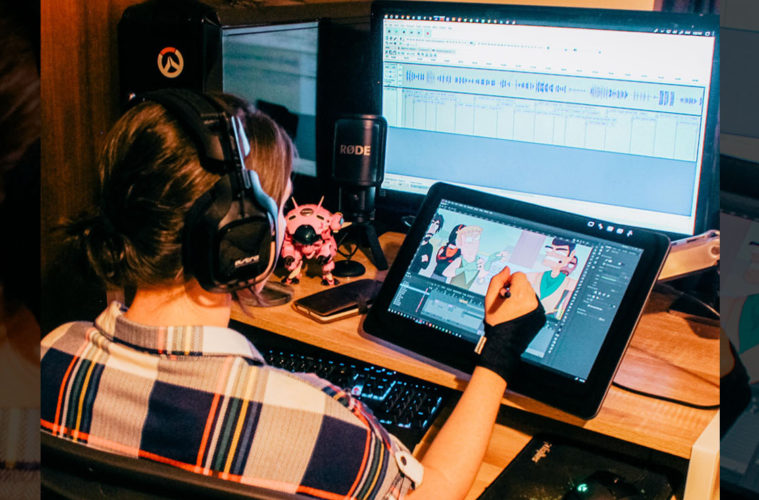 The Balance is an interview series where creators discuss the challenges of navigating their way through the difficult seas of balancing a ‘day job’ with full time passion projects.

Bec White is a Central Coast based graphic designer and self-taught animator. Known in the YouTube community as ‘Beclet’, Bec started sharing her artwork online in 2006, first publishing what she calls “some really bad stuff I made when I was 15” on DeviantArt.

Eventually discovering animation sharing website Newgrounds, Bec was inspired to learn more about making animation, teaching herself the process while also continuing to work on other design projects like digital painting. “I was so intrigued by animation and just loved watching those good ol’ stickman fights everyone seemed to be making! I decided to try and learn it. From there I taught myself animation and it was a minor hobby between my digital paintings. I was pretty bad at it, but I kept trying and eventually got better with time.”

Now 26 and working full time as a graphic designer, Bec has struggled at times with finding the time to work on her passion projects. “As I got older and busier I lost my free time to do these hobbies, and at the time I didn’t realise I was starting to lose my passions by being pushed into a mould society has already chosen for me. Basically, my dramatic way of saying I was becoming an adult and needed money.” The rise of YouTube inspired Bec to start a channel in 2012 where she published vlogs, gaming videos and, when she had time between work and study, the odd digital painting or short animation.

Above: An early animation by Bec from 2013

Forging a career in a competitive industry like graphic design requires massive dedication; although the time demands were high, the corporate nature of the work fuelled Bec’s need to express her own creativity. “Graphic design is more basic than you would think and doesn’t really fill that void for me, so I have plenty of room left to be creative in my own way.”

A breakthrough came in 2016 when game developer EA announced a short film competition related to their war-game franchise; Battlefield. As a huge fan of Battlefield 4, Bec was easily inspired and used the comp to cannonball herself back into animation. “I had 4 weeks to make something and decided to do my professional trick of not planning ANYTHING and dive straight into animating with my own BAD voice acting skills and cringey, poorly written jokes.” Despite the short deadline, Bec’s video landed in the top 5 contenders and was the only animation to receive the honour.

The winner was chosen at an event in Sydney. “I ate some free food, drank some wine and watched all 5 videos with the other finalists and marketing team of EA where they called out the winner (spoiler alert: not me), and stayed in a nice apartment for a night courtesy of EA. It was a great experience! I met some fellow creators that I’ll never forget, and it was my real first taste of a ‘YouTube Life. I’m so grateful to EA for that opportunity.”

The second taste would come some months later when EA released Battlefield 1 and ‘Types of Players in Battlefield’ chucked a big fat viral, racking up over 2 million views. When it happened again, Bec started to think a bit more seriously about things and began studying the 12 principles of animation and following YouTube animators who she looked up to.

“When the first Battlefield 1 DLC came out, [going viral] happened all over again and the toon currently sits on 3.8 million views. I saw the potential for animation on YouTube was actually massive. It’s been about 2 years now and by taking my time with it I have learnt a lot, and feel like I’m really ready to pursue making more and more parody cartoons for YouTube. My main topic being Video Game parodies after growing up gaming, I can’t really picture myself making anything else, this is what I enjoy the most, and the community on YouTube for this style is huge.”

Above: ‘Types of Players In Battlefield’ Bec’s first viral animation.

The community also provides support and feedback for creators, which helps to keep motivation levels high. “The love and support I get for my creations is the #1 thing that makes me want to keep creating; it’s the interactions in the comments between everyone that I just love to see and read all the time.” There is, of course, always the dark side of the YouTube comments, the recent societal shift and popularity of feminism has certainly brought the dickheads out. “Now people seem to think it’s [a feminist piece] because I drew myself as a female character in a video game setting, (PSST it’s actually just a drawing of me, I’m a girl and did the voice acting myself haha).”

A recent decision to start live streaming the making of her animations has opened up new window for feedback and interaction with her community. Speaking at length about this choice, the gratitude and genuine affection Bec has for the people who actively support her work and offer encouragement, is clear.

“This [live streaming] has been really fun! Because animation takes so long, and I was busy with life stuff as well, I kind of neglected my YouTube channel for a few years. I noticed one of my favourite animators, Matthew Shezmen on YouTube (he makes Dark Souls cartoons!) was streaming animation, so I decided to give it a go too, it looked really fun.

I started on Twitch but we all know that’s more for gaming, and well, it’s hard to break into a new platform. So, I decided to try streaming on YouTube and that worked much better for me because I already have a community on there, so those subscribers were getting notifications of my streams. I honestly didn’t think a single soul would watch me animate, it’s so slow and painstakingly boring to watch. But I have discovered the same people keep coming back to the streams and showing me support.

It blows my mind that they are so supportive, and thankful! They tell me ‘thank you’ a lot and express how grateful they are for how much effort I’m putting in for others entertainment. I kind of failed to see it from that perspective, and I may only have an average of 10-20 viewers but it’s enough to show me that my subscribers are so incredibly supportive; some of them even stick around for the entire stream, and that can go for 6-7 hours+ on occasion! I love them all, they are so great and kind to me!”

The gratitude Bec has for her community is understandable. All of Bec’s animating happens in her spare time, which there isn’t much of between full time work, staying fit and spending time with her partner. Live streaming gives a social aspect to the ‘work’ of animating and turns it from a solitary experience into one that allows Bec to get to know the people in her community on a different level, and vice versa.

“Streaming has given me a way to have regular content out there for my subscribers, and it has also helped me build a closer connection with [them] because they get to know me better. Instead of just watching a cartoon, maybe (hopefully) laughing at it and clicking away forever, they remember who made it and stick around for the next one. I feel like seeing what goes into an animation (e.g I spent 7 hours+ on a 3 second scene one fine Saturday) helps viewers gain respect for animation, which is just awesome because I think the animation community on YouTube can feel unappreciated at times.

It’s been a lot of fun, and I have built a connection with my audience a lot faster and stronger than I think I would have if I just plopped an animation on my channel and left it there to fester. I intend to keep doing it for sure!”

Bec is just as supportive of the YouTube animation community as they are of her. When asked for some of her favourite YT inspirations, the list went on for quite some time. Quite. Some. Time. It was a loooong list.

The people who have tuned in to Bec’s recent live streams or who follow her on Patreon, know that for the past 10 months Bec has been working on her largest project to date, the just released ‘Fortnite: Failure Royale’ a Fortnite parody cartoon. “I decided to make a Fortnite cartoon, because, well; when I first started playing Fortnite, I loved it. The colours, the style, the design…it’s the kind of cartoon style I loved growing up and was very drawn too (pun intended!), pair that with my love of gaming and art, I kept playing it and got inspired to make something. The game was also gaining a lot of traction so I saw an opportunity for content as well.

At the time of starting it I was already well and truly into a Zelda cartoon, and I shamelessly abandoned it to work on this one (I definitely plan to finish is straight after this one). During my phase of “liking” the game, I soon realised I fucking sucked at Fortnite, and I think I fell in the “average players” bracket. I got a concept for a short animation in my head about “The Average Fortnite Match” and how it would go for the everyday player.

I was excited to work on it, so I started executing it IMMEDIATELY. Without a storyboard… without voices… I was just excited to make something. It was turning out okay, but after I finished that part of it, it didn’t really make sense, which is usually the case when you skip straight to animating something without any prior planning or story boarding haha. By then I was over playing Fortnite, but I had to see this thing through.

I had a tonne of time left on my hands (apart from when I went back to Overwatch, but we won’t mention that again… *ahem*… I’m pretty good at procrastination) to work on the cartoon, so I said ‘fuck it, make it quality, take your time.’ 10 months later and I still don’t know why it’s taken me this long, but I’m polishing the hell out of this thing.

Going back to that moment of deciding to make it better quality’, I started scripting it and story boarding AFTER half of it was still done. So essentially, despite having no initial plan, the cartoon has evolved into how the average match will go for a “Fortnite Default”, otherwise known as a new player or “N00b”. I’ve learnt SO much in the last 10 months about the principles of animation, and how important scripting, story boarding and animatics are to the overall finished product. I’m excited to make better quality content moving forward.”

Bec already has plans for her next projects which, of course, include ideas for more video game parodies. The Legend Zelda, Dark Souls, Mario Universe and Overwatch are among the games Bec says she is “100% making cartoons for.” Each project is currently at a different stage of development, some were even (such as TLoZ) kicked off well before ‘Failure Royale’ was even an idea. Like many young creators who are balancing their ‘passion-projects’ with full time work, Bec is using the Patreon platform, (which allows fans to give direct monetary support to the creators they love) in the hopes that contributions from supporters will allow for these future projects to be completed in a shorter time frame than the almost-full-year, it took to complete ‘Failure Royale.’ To support Bec, head over to her Patreon page, and of course, check out ‘Fortnite: Failure Royale’ on YouTube (or just below).

Bonus: For any gear lovers out there, here is a list of Bec’s current animation rig:

Astro A40 Gaming Headset with MixAMP

A crappy desk from Officeworks