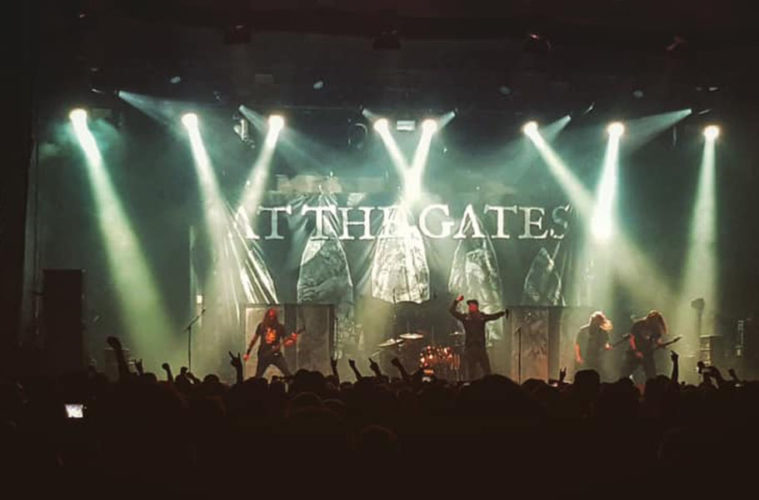 To be honest, Hardline don’t fuck around at all. In the past 12-18 months they have managed to bring out some of the most incredible bands and lineups this big, burnt slab of land has seen in decades, including Ensiferum, Michael Graves (Ex-The Misfits), Therion and even Venom Inc. The crazy thing is they’re not done yet.

Having already announced upcoming tours from Soilwork, Girlschool/Venom Inc/Raven and a Skinlab/Pissing Razors tour; which to be honest, this reviewer thought he’d ever see on our shores.

So, to the subject at hand:

Sweden has moved into Sydney. Aptly billed as the “Triple Bill Kill”, the lineup boasting a three pronged Swedish Metal onslaught; from relative newcomers Witchery, thrash metal Stalwarts The Haunted and the band that is responsible for an entire musical movement in the late 90’s and early 00’s (Metalcore/Metallic Hardcore): At The Gates. Beat that European tours! Suck on that American festivals!

So with all the hyperbole out of the way, this show was set to succeed. However, there were some speed bumps along the way. The show started half an hour late.

Local thrash metal 5 piece Lethal Vendetta took to the stage to warm the half-filled Manning Bar. To be honest they played exceptionally well, but they were mixed atrociously. Fortunately the crowd didn’t seem to mind much. The band are relatively new within the metal scene of Sydney but they certainly don’t lack in musical acumen, style or substance. It was just a shame that drummer Morris was basically inaudible. Vocalist Brent did his best to cut through the sonic dirge and although he fell short (No fault of his own; it would’ve been difficult for even the most seasoned vocalist to do so), he managed to hit some almost Halford-esque vocal peaks that cut through and showed some of the bands potential off.

Sound issues aside the band had a great time on stage. Lethal Vendetta act professionally and they hammered through a short set thanked the crowd and got off the stage as quickly as they came on. I look forward to seeing them again in the not too distant future, because to be honest, they seem like a fantastic band with a bright future.

Fortunately the sound issues didn’t continue for Witchery and (spoiler alert) they were the surprise highlight of the night. Including alumni and current members of metal royalty such as The Haunted, Seance and Entombed AD, this blackened thrash/speed metal powerhouse was bombastic, incredibly fast and infectiously catchy. Drummer Chris, Guitarists Richard and Patrick, and live bass player Victor (Sharlee’s other band, you know, Arch enemy, are busy on the other side of the world atm so he couldn’t make it this time) grace the stage to a rousing welcome from the now sardine packed venue.

Their intro track “Great Northern Plague” blasted over the loudspeakers before vocalist Angus joined the band and kicked into their semi title track “Legion” from 2017’s century media released album I am Legion. Angus is at least 6’3, sported corpse paint and dressed in a Victorian Gothic getup. The commanding front man let out a demonic, filthy scream as the band blasted into a stomping rendition of “True North” (Also taken from 2017s album I am Legion).

Witchery is melodic where they need to be, supremely speedy whenever the chance arises and catchier than a summer cold.

Although the onslaught of pummelling riffs and throat-tearing screams are absolutely out of this world, their secret weapon lies within drummer Chris Barjenko (Ex-Carnal Forge, Ex-Kaamos). He finds every pocket to sit in and obviously understands the importance of simplicity within chaos.

Witchery have won many a fan in Sydney tonight and although this is their first time in their 21 year career for them to visit this convict colony there is no doubt in anyone’s mind that they will return and hopefully soon.

Next up we were greeted by 4 of the 5 members of The Haunted as bassist Jonas Bjorler had to miss this tour due to a family health emergency. Vocalist Marco Aro, Guitarist (and YouTube star) Ola Englund, drummer Adrian Elderson were joined by guitarist Patrick Jensen (Who literally left the stage 20 mins beforehand after performing with Witchery) to beat the absolute piss out of the Sydney crowd.

The Haunted did not fuck around with their releases, spitting out classic after classic and culminating their rise with 2004’s rEvolver. Although they may have plateaued in numbers and creative output they still know how to write the Christ out of a riff.

Now, original (and on again, off again) vocalist Peter Dolving might be the starting point of The Haunted but the current lineup has the hammerhead shark vocals of Marco Aro. Although he looks like a pitbull in a hockey jersey he has the biggest smile and seems genuinely excited and grateful to be on the other side of the world singing songs from the bands back catalogue.

Although Jonas was not on stage, The Haunted were sporadically joined by Witchery touring bassist Victor Brandt. Touring without a member must be difficult given the circumstances, but the band were in high spirits and played their songs without veracity. Leaning more towards a loose death and roll/punk ethic whilst on stage, the crowd lapped it up as The Haunted battered every punter over the head for 14 songs of life affirming Swedish thrash metal. The absolute personal highlight came in the form of the incredibly triumphant, slamming rendition of “DOA”, which comes from one of the first metal albums I bought (and subsequently hid from my parents because they would’ve deemed it “Evil”): 2003’s One Kill Wonder.

The closing 3 tracks were absolutely beyond vicious. “Dark Intentions”, “Bury Your Dead” and “Hate Song” saw the floor of The Manning open into a circle pit that would put any other crowd to shame. Marco and co were foaming from the mouth with gratitude and excitement for the crowd and its interactions. It’s truly a heartwarming experience watching them love every moment of being on stage.

Although our time together had ended the crowd left the stage with smiles from ear to ear. I’m sure that every member of the crowd were sporting the same shit eating grin.

Last but obviously not least the monsters in the flesh graced the stage to show everyone how the fuck it’s done. At The Gates are a must see band for a fan of basically any type of modern metal. Forming in 1990, ATG paved the way for melodically-driven death metal and forward thinking thrash metal. The band broke up in 1996; one year after their culture-defining album Slaughter of the Soul (which has been carbon copied to death ever since).

Having reformed in 2010 – much to the joy of the collective metal scene – vocalist Tomas Lindberg and co went about touring their assess off to remind everyone why they were so important. At The Gates have since released two albums (2014’s At War With Reality and the more recent and darker To Drink From The Night Itself) and are back in full swing with a new(ish) lineup and renewed hunger to beat the metal world into submission.

Adrian Elderson was back on stage behind the kit (The dude is 49 years old and played 2 sets amounting to over 2 hours of extreme metal drumming). He was joined by OG Guitarist Martin Larsson, new guitarist Jonas Stalhammer (Ex-The Crown) and the big dog on vocals; Tomas “Tompa” Lindberg (they share their bass player with The Haunted so obviously Jonas was missing however he was able to record most of the set for a backing track so his presence was felt). The band was also joined sporadically by multi-talented members Ola Englund (The Haunted) and Victor Brandt (Witchery/Entombed AD) to fill out some songs and to give the Australian crowd a true night to remember.

Although At The Gates played 17 songs they completely avoided their early material from albums like With fear I Kiss the Burning Darkness and Terminal Spirit Disease. It was a bit of a shame as these albums are often overlooked due to the absolute staggering critical success of 1995’s Slaughter of the Soul.

Negative aside, tonight’s set was a triumphant celebration of the legacy of At The Gates and their impact on heavy metal culture. They not only spearheaded a genre; they perfected it and left it before it became stale.

Showing no sign of fatigue, the band played incredibly tight and Tomas sounded as vicious as ever (He’s 48 and sounds as vital as a 19 year old). Even the crowd couldn’t keep up (to be fair this was their fourth band of the night). Obvious highlights from the set were the 5 classic tracks from Slaughter of the Soul; “Cold”, “Under a Serpent Sun”, “Suicide Nation”, “Slaughter of the Soul” and the absolutely unrelenting, crushing “Blinded by Fear”. However, these songs did not overshadow newer tracks like “A Stare Bound in Stone”, the sombre “The Mirror Black” or the non-stop thrashathon of “The Book of Sand (Abomination)”.

It can be said that heavy metal is becoming a victim of its own nostalgia. That night will become an artefact in the timeline that proves that bands like At The Gates don’t need to rest on the laurels of the past victories. They look forward to the future of metal and it looks like they’re bringing us along with friends in the shape of The Haunted and Witchery. Future’s bright, Man.