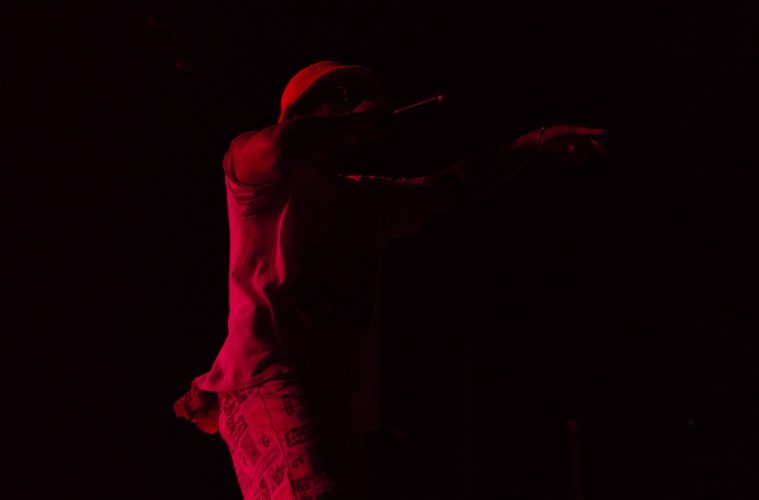 Nai Palm opened the gig as the sole support, and what an artist to have as the opener.
Her set comprised solely of her vocals, her guitar and three backup vocalists.

The songs had a great deal of passion bringing them forward. A powerful voice arose from Nai Palm as she effortlessly moved through her set. Her guitar playing allowed for a good level of technicality, but none of it was for show. The vocals remained the driving force and the guitar provided melodic backing.

Nai Palm didn’t move around too much but this was an artist that didn’t need to. She held the audience well with her ability to give so much presence to her songs through her delivery.

As her set progressed the audience responded more and more favourably. It was a most excellent opening set.

There wasn’t too long a wait before Anderson .Paak took to the stage. His set started more moody before it really kicked off. Behind a semi-transparent screen Anderson .Paak and his band performed the first song. Anderson .Paak was on drums to begin (and returned to them on occasion). However, it was not long before he came to the front of the screen.

Once in front of the screen Anderson .Paak and moved into “Who R U”. He kept the microphone in stand and used only some of the stage. Occasional pyrotechnics fired off, which served well to emphasise beats. Normally I’m not a fan of pyrotechnics and this was no exception. However, they still remained appreciable as they  genuinely added to both the song and the performance.

After this Anderson .Paak put in an incredibly physical performance. He moved quickly and smoothly, owning the stage without being blatantly possessive. It was his world in which he could be expressive and he made sure that he was as energetic as possible.

As Anderson .Paak performed various shapes and colours appeared on the screen, as well as the rear of the stage. Once the screen went down the projections continued. They became more ornate, contrasting and saturated, but never to the point of overwhelming. It was another element, another thing to feast the senses upon.

The tour was to support Oxnard, so predictably a number of songs from Oxnard made an appearance. The audience lapped it up as much as they did the older material. At times they became louder and significantly more deafening than anything else. However, it was good to see a crowd so enthralled in the performance and the songs.

Overall Anderson .Paak put in a satisfying performance. The audience was receptive and fed well off of the energy coming from the stage. Even if you don’t enjoy his music, it would be hard to deny that he puts on a good performance.

The songs were massive, and on that night so was Anderson .Paak.