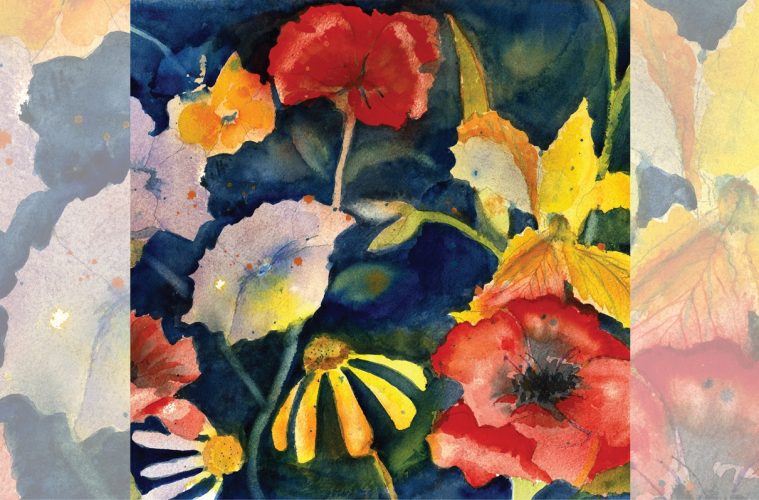 A click and a ringing, then a single note followed by some more notes. Striking, yet gentle and spaced guitar sounds play gently whilst chimes ring peacefully in the background. Soon the music comes into more of a shape. It is gentle, tender and seemingly peaceful; A nice way to ease into “Music For Indigo”, Instrumentals‘ first piece.

A slight pause and then there’s build into something with more of a bounce. Maybe it’s a light hop. There’s a little less space but the playing still feels quiet. The section remains peaceful and it keeps on flowing until it too finds a pause.

Here the song shifts back into something more spaced. Notes seem more careful, almost as though a desire to lull into a more relaxed state has taken over. There’s a slight build that eventually gives way to chimes for a very brief, sublime moment. Then the guitar returns, ringing out a singular note in a way that implies a sense of delicate echoing. Up to this point, despite the shifts the piece has felt mostly connected. Here it feels as though Adrianne Lenker has come to a pause and is working out how to proceed. It’s not long before the way forward reveals itself, however, and so the gentle playing continues whilst giving most notes breathing space.

Soon the chimes return and the guitar picks up pace, then oscillates for a moment before returning to spaced notes. It’s all light and peaceful and perhaps upbeat, almost joyous stuff. Eventually it carefully descends into something a bit less so, though only for a brief moment. The playing shifts back to sounding lighter; as they delicately flicker, natural harmonics become the prominent guide. They provide a nice shift in tone and build in mood just before the piece returns to something with more guitar and a little less space.

It’s here where the song feels like it has returned from a period of aimless, relaxed wandering. “Music For Indigo” becomes more lively, steady and focused, but it remains relaxed and at ease. The section is busier, but it doesn’t feel busy and cluttered; it just feels relaxed and highly melodic and flowing.

As this section fades Adrianne Lenker’s quietly says “I’m starting over”. Another brief pause and then some gentle strumming comes in, almost like shifts in a light breeze. It’s not quite hypnotic, but it’s rather relaxing and low-key. Once more it feels like Lenker is working out the next step, but less overtly so. Once the gentle strumming reaches its end it closes on a natural harmonic and some background ambience.

The background ambience flows through into “Mostly Chimes” which resume the guitar playing. Slow it is as notes ring out and softly fade away before the next set find themselves looping a pattern. They seemingly slow down and speed up in places; Volume shifts a little and gradually some of the parts gain a bit more expansion in tone and range.

A gently arpeggiating pattern appears, moving the piece forward. It’s calm and lightly melancholic as it drifts on, seemingly wandering, wondering and searching. A “dulled” note eventually finds its way in and feels like a percussive counterpoint to a careful dance. Eventually this all fades away and chimes take over. The chimes move slowly, draw out their notes and hum in an unhurried manner. Somewhere in background of the tonal expression wisps of pretty birdsong build on the music.

The chimes fade out for a moment, leaving a suggestion of quiet, though the birdsong remains. It’s a moment of breathing in a space full of air. Then chimes return, humming away and the birdsong continues, though now for a moment joined by something like a pleasantly aimless percussive sound as low and as gentle as the chimes.

Between two pauses the percussive nature of the chimes comes a bit more to the forefront, perhaps functioning as another breathing point. The section is both full and sparse, striking out with multiple gentle thuds and lasting only for a short moment.

The humming soon returns and stretches out and relaxes. It is though it is painting a scene of a house by a river in a forest contained within a mostly sunlit spot. More sounds appear and the chimes pick up and become livelier in a way that suggests climax of the most gentle variety. The sounds become fuller and greater, though without intensity. All remains relaxed and eventually fades out, just in time for more birdsong. The chimes then return and their tonally harmonious ringing slowly stretches out, though not in a revealing or unfurling way. Eventually it gives way to what sounds like foliage crunching under steps, leading to something perhaps more grounded which lasts until “Mostly Chimes” suddenly ends.

Instrumentals is an interesting work in how it leads on from Songs. Rather than a series of individual verse / chorus / verse tracks that work together, Instrumentals feels like two sides of the same piece. There’s still a sense of the personal and expressive in the music, but in relying more on sound the album feels more subtle.

“Music For Indigo” feels mostly like jamming based around specific feelings or sensations. It’s very much in the vein of a series of rough sketches that work together. Some of the changes feel abrupt which works in terms of shifting mode to carry expression. However, rather than remain in the background, at times the piece seemingly looks to draw attention to itself which can break its spell. Comparatively “Mostly Chimes” instead keeps itself mostly in the background. It neither pushes nor pulls making it easier to become lost within its sounds as they gently flow onward.

Treated as ambient music, Instrumentals works nicely; “Mostly Chimes” more so than “Music For Indigo”. It also works nicely treated as a postscript to Songs. Whilst Songs feels like expressing and coming to terms with certain things, Instrumentals feels like the result of coming to terms. If it actually is I’ve no idea. Regardless, the album does make for some pleasingly relaxed and peaceful music.