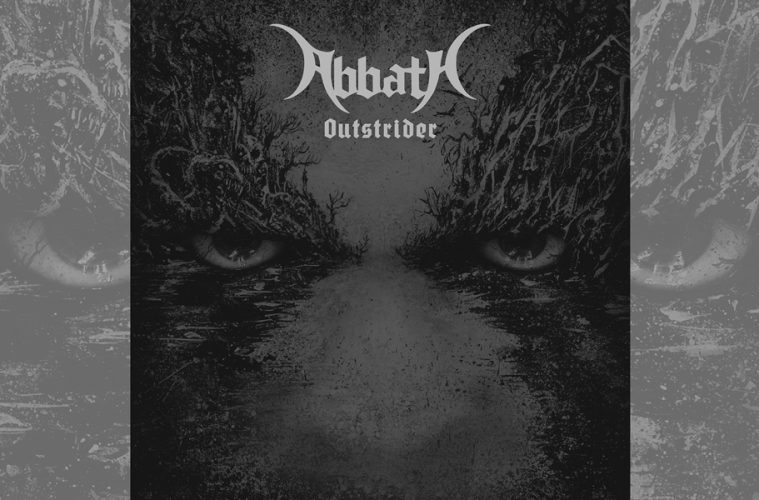 There he is in all his glory, the Lemmy of black metal, Abbath; The crab-crawling, corpse paint-wearing, alcohol chugging legend. Following up from his 2016 self-titled LP, the former Immortal frontman is back with another “solo” record.

Outstrider sees a small lineup change; King (bass) and Creature (Drums) are out, but don’t dismay as the new lineup of merry men (and women) are more than capable of ripping some absolutely elite blackened metal. Ukri “Uge” Suvilehto joins on drums, Soulfucker aka Mia Wallace holds down the low frequencies and the relatively unknown Ole André Farstad joins on lead guitar.

Recorded and produced by the one and only Endre Kirkesola (Chrome Division, Blood Red Throne, Green Carnation etc) at Dub Studios in Norway, Outstrider sounds brighter and – dare I say – more upbeat than the previous effort from Abbath.

Alright. All that nerdy shit is out of the way and – I know – you’re asking: Does it slap? Well, yeah it fucking does.

The album opens with a howling wind and an eerie echoing acoustic guitar. Now don’t panic because it rips into an epic, almost uplifting wall of guitars and drums, and Abbath’s gurgled blackened voice. It’s like watching Lord of the Rings but all of the characters are speaking in black speech; it’s that epic. The icy blasts that take you through the rest of this 4-and-a-half minute triumph are met with absolutely blistering guitar solos. What a statement to open this album.

The surprises don’t let up there. “Bridge of Spasms” almost comes off as a thrash song, and Abbath’s vocal “Hnggoooohh” (listen to the song and you’ll get what I mean) sounds like he’s transcending to the blackest of abysses and enjoying every moment of it.

It seems like the theme of Abbath’s sophomore record is to fit in as many good riffs and epic passages as possible. Whilst this is demonstrated throughout the record, it is standout track “Harvest Pyre” that catapults Abbath into the stratosphere. A black metal song that has melody and hook is something that I’m sure all you first and second wave fans are rolling your eyes about, but this song provides elements of classic metal, early black metal, and even progressive rock. This deceptively simple and catchy track is a culmination of Abbath’s love for heavy metal and good hooks. And that fucking solo; if you’re not air guitaring to that shit in your room when it comes on, you might have a  just lost some spark for life.

But, I’m not here to abuse the readers; I’m here to tell you about this record, right? Outstrider is NOT a black metal record. However, Abbath has not turned his back on his roots. Although the album leans more toward classic and pagan metal, there are still massive washes of black metal all throughout. It’s just not the centre piece.

So, in the current landscape of metal where does Abbath and his cohorts stand in the? Not to be hyperbolic, but this band and this release should be on the lips and tongues of every extreme metal fan out there. Outstrider is a celebration; a gift from the blackened gods (or devils) and Abbath is the best conduit for it to come from.

Both he and the band have certainly carved out a place on any festival circuit in Europe (or anywhere in the world for that matter). How they have is completely showcased on the anthemic, inspiring title track “Outstrider”; a stomping celebration; an almost centrepiece to the album bookended by acoustic guitars. This standout track is what I would show a friend who asked “What is the new Abbath album like?”.

It’s so common with metal releases these days where an album’s last few tracks seem tacked on to fill up some space. You know, lead with your strong material. Abbath’s just gone and ripped up the book and filled the whole album with absolute stompers.

The back end of the album’s “Scythewinder”, “Hecate” and the (special edition’s) CRUSHING cover of Bathory’s “Pace ‘till Death” are just as strong and weighty as the rest of the album. It’s like Abbath knew he needed to keep some absolute gems for the third act.

The truly magical thing about this record is you can listen to it on repeat and not tire of it. You will find more splashes of colour, dissonant leads and infectious ear worms each time you spin it.  So, what I’m trying to say is that there is not ONE dud song on this album.

So, the question remains:

What the fuck are you still doing here reading some asshole’s review? Get off your ass and go and get Outstrider ’cause you don’t want to be the only kid on the block without it in their top 10 AOTY list.